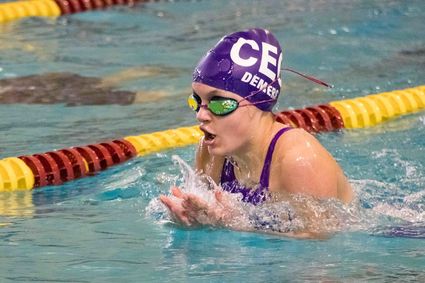 For a team that prides itself on being one big happy "swamily," a season of Covid restrictions made things much more challenging, said Cloquet-Esko-Carlton head coach Rachel Peterson. Then when a crucial dehumidifying fan caused the pool to close down for more than a month, it only added insult to injury.

On the bright side, they made it through the hard times - busing for limited practices three nights a week in Duluth, doing dryland training - and many swimmers achieved personal bests during last week's Section 7A finals. The team finished sixth out of 11 teams, which competed at three different venues.

Sophomore Hannah Sandman was the top individual finisher for the Lumberjacks in Saturday's section meet, taking third place in the girls 200-yard freestyle in 2 minutes, 5.49 seconds. Peterson also mentioned Sandman's performance in her butterfly (she took fifth) and her 400 relay split.

Other highlights of Saturday's meet according to the coach?

• Emma Peterson in her 500 free under 6 minutes for the first time ever (sixth place). "Had to believe in herself."

• Megan Chopskie in all her races. "She is faster than she believes! Under 1:00 in her split for the 400 relay for the first time!"

• Jessica Pagelkopf in diving. "Jess missed a couple of weeks of practice and competition due to an injury and fought back to great shape to place well."

• Bailey Myhrman, a senior, swam 1:20 in her 100 back with a sprained wrist and a badly injured shoulder. "I wish I had a picture of her expression when she finished her race. Radiated joy. While not a high placing or "fast" swim, it was a crowning personal achievement for her last meet."

• "Our 400 relay of Belich, Peterson, Chopskie and Sandman. Under 4 minutes for the first time ever. We talked about the possibility, but the probability was uncertain with training as it was. They believed in each other and pulled it off."

The team will say goodbye to four seniors: Anna Carlson, Elise Carlson, Grace Liupakka and Bailey Myhrman. "It was really hard, especially for our seniors who normally have a lot involved in "passing the torch" to the younger girls they have not truly had enough time to know well," Peterson said.

But they return many talented and determined swimmers. 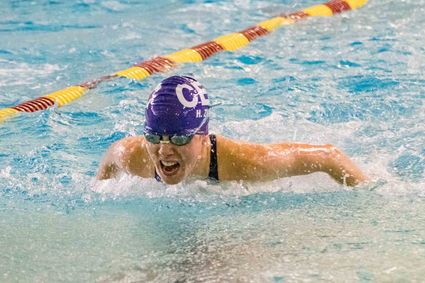 The coach talked most about the effect of the pandemic and social distancing restrictions on her swimmers: the "surreal" silence of the swim meets without spectators, how the girls had to practice in pods that had to be separated from each other - and swim for less time - and, above all, the inability to bond as a team at practices and meets.

"Trying to take the social out of our team is like ripping the heart out of it, social distancing is anathema for this team and was very difficult to work through mentally for most of the girls," Peterson said. "It added a whole extra level of stress to a difficult year.

"[I'm] hoping that next year is more "normal" for all of us, but especially these young ladies who need that social interaction and support of their peers during this period of their lives," Peterson said.