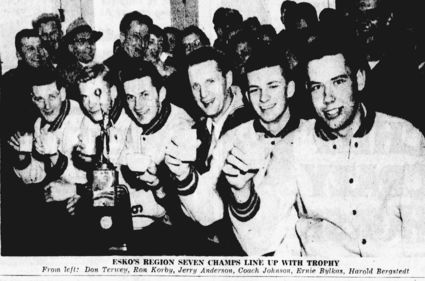 The Esko boys basketball team was escorted from Hibbing to home and Hank's Coffee Shop after winning the region and qualifying for the 1955 state tournament. It was the first team from Carlton County to play in the tournament. This week, the last of the starters for the team, Jerry Anderson, died. He is shown in this newspaper photograph third from the left.

Jerry Anderson, the last surviving starter on the first boys basketball team from Carlton County to reach the state tournament, died Tuesday at age 83. Anderson was a star on the 1955 Esko team that won the consolation championship. The success of the Eskomos preceded runs by Cloquet and Carlton in subsequent tournaments in the late 1950s and 1960s.

Pine Knot News writer Steve Korby wrote about Anderson this past October, after fellow starter Don Terwey died on Sept. 30. Anderson said he met Terwey in the fourth grade and they were lifelong friends and had a hunting shack together for many...