Police have new eye in the sky 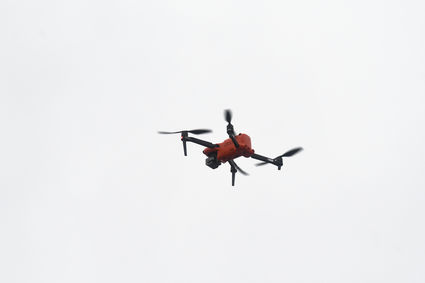 An Autel Robotics EVO II Dual drone hovers in the air over Cloquet during a demonstration flight Nov. 25. It will be used by the multi-agency county drone team for search and rescue, locating firefighting hot spots and more.

It may look and sound like a toy, but Carlton County's newest device promises to be a boon to local public safety efforts.

The new Autel Robotics EVO II Dual drone has a high-quality camera with two sensors - one visual, one thermal - that can be used for everything from search and rescue to finding a hot spot in a fire.

The new drone was donated to the county by Frandsen Bank and Trust, which offered a new drone to every county sheriff's office where they have a branch.

"Eight of them accepted our donation, including Carlton County," said Mark Lanigan, president of the Cloquet Frandsen Bank and Trust. "This is state-of-the-art, the newest and best technology, these are really nice units."

With the donation, the Carlton County drone team has significantly upgraded its stable of drones. The team includes law enforcement officers, firefighters, and one person from the county GIS department.

There are a total of 15 certified pilots on the team, with more people serving as support staff. They come from across the county.

"The nice thing about having these good working relationships is we are able to come together and share our resources and personnel to accomplish what we need to," said Cloquet police chief Derek Randall, one of two CPD members of the drone team.

All of the drone pilots are now FAA-certified, and do monthly training to keep up their skills, learn new technologies and learn the different capabilities of the various drones.

Drone pilot Steve VanKekerix, of the sheriff's office, said the new drone has a much better camera system than the county's current drones, and greater capabilities for infrared sensing, used to detect body heat or hidden fire locations in a house fire.

Drones help speed up operations such as search and rescue, and keep officers and others doing the searches safer, said Carlton County sheriff Kelly Lake.

"We can connect to a big-screen TV in the back of an emergency rig and spotters can view what the drone is seeing from up top," explained Randall. "We can program to do mappings, the technology is really incredible."

That means if the drone spots a person in the woods, for example, team members on the ground could navigate to that location easily.

Adam Shaw of Maverick Drone Systems, which sells the drones out of its facility in Savage, Minnesota, said the new drone sports a very high-quality military grade thermal sensor as well as a high-quality visual camera. Its batteries each have a 40-minute battery life, giving pilots more time to explore with the drone. The drone can be directed with a controller or by using a smartphone app. It also comes with a powerful lighting system.

So far, the county drone team has used its current drones for one search and rescue operation, which was successful, Lake said.

"It is a fascinating new tool for us," Randall said. "I think in the future we'll see more uses, more scenarios that come along, not just in law enforcement, but public safety, rescue. There are agencies around the country that now use these for accident mapping, with drones taking images of where things are." 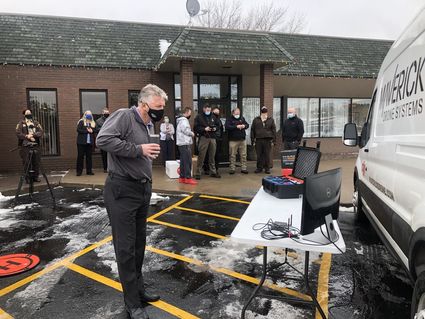 Lake said the county could use the drones during a flood, for example. "The county highway department could use it to fly over and assess damages," she said.

Randall pointed to the use of drones during the Husky Refinery fire in Superior.

"You see fire departments putting up drones so they can get eyes in the sky," he said. "At the Husky fire there were a lot of agencies that had drones up, and they were able to see where the actual source of the fire was, and directed those fire members in safely to put that fire out, using the drones that could see from up top."

Many of the members of the drone team were present during the donation and demonstration at Frandsen bank on Nov. 25, and Randall actually got to fly the new drone. He was surrounded by fellow pilots, all intently watching as he maneuvered the device from his cellphone.

Both Lake and Randall thanked the bank for the donation.

"With budgets what they are, oftentimes things like this might be at the bottom of the list for tools we need to function," Lake said. "We're very appreciative of that."