Throwback station throws in the towel

Pete & Sons is closing at end of year 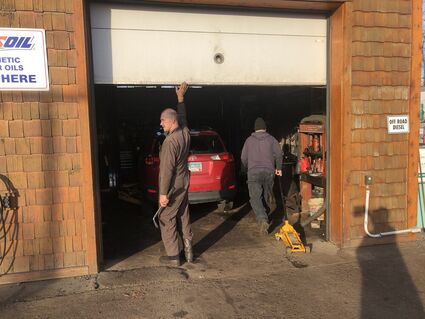 Jerry Fink closes the door to the repair garage at the Pete & Sons service station in Cloquet while brother John pulls in a car jack. The pair will close the station at the end of the month. It's been providing now rare full-service gas fill-ups since 1968, when it opened simply as Pete's.

At the end of 2020 - a year that many would like to forget - Cloquet will lose a long-standing and beloved business when Pete & Sons service station closes.

It's been the best year in recent memory for the 52-year-old business, said John Fink, standing inside the garage at the full-service gas and repair station on the eastern end of Cloquet Avenue.

John and Jerry Fink are the "sons" on the sign. The brothers have been working at the service station since they were youngsters. Jerry's been there 44 years, John for 37.

"You know when you get summer vacation and you think: Oh, we can just sleep in until whatever. We couldn't," Jerry said. "We had to come down and say we are going to work now."

Jerry is 62 and says it's time to retire. John, seven years younger, said he doesn't want to run the business without Jerry. None of their kids are interested in taking over the family business, although John's son did work there for a while.

It's been their life's work. Jerry and John learned all their mechanical know-how and small business skills on the job, courtesy of their father.

"He'd probably still be here if he was still alive," Jerry said, then both men chuckled. "He was one of those breeds that loved work."

Asked what it's been like to work with his brother for so long, John smiles. "I like it," he said. "It's somebody you can trust, somebody who's always got your back."

The full-service station was a bustling place last Thursday morning with drivers coming in to get a tank of gas and their windshield cleaned by one of the Fink brothers, the station's only employees. In the slower moments, Jerry finishes up a brake job on a Toyota perched high on one of two lifts in the garage.

John handles more of the drive-up customers, but Jerry heads out when he's needed at one or two of the four pumps outside. It's difficult to tell if he just knows when he's needed through the bond of brotherhood or what, but there was no hollering for help when all four gas pumps were full.

"It's a hometown, old-fashioned, local service station that I've really appreciated over the years," said Bruce Jahn. "Pete and his sons, they're part of the fabric of Cloquet."

As of right now, Pete & Sons is one of two full-service gas stations left in downtown Cloquet; Best Service at the Frank Lloyd Wright designed gas station is the other. There is also one full-service pump at Fond du Lac Gas and Grocery, John pointed out.

They also may be the one place in Cloquet that still has a pay phone in the lobby. "That's our business line actually," John said. He laughed, but it's true.

Business at the full-service station wasn't gouged much by the advent of Kwik Trip into Cloquet. It saw a dip for about a week and then it was back to business as usual. 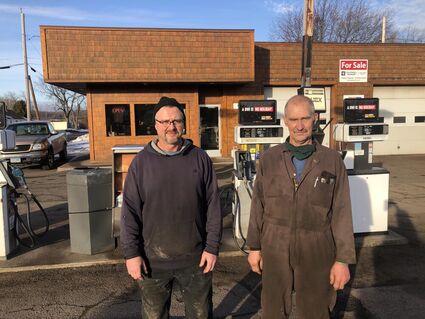 So he or Jerry will fill up the tank, wash windows and check fluids if a customer wants him to. They carry off-road diesel, and can refill propane as well as tanks for wire feed welding, oxygen and acetylene and more. Inside they have a diminishing supply of batteries, tires and various fluids for vehicles. The brothers do minor repairs, brake jobs and the like. They both say they've enjoyed working together but it's hard work, and they don't get much time off. The building is for sale. They've had inquiries but no serious offers yet.

Pete & Sons will close the doors on Dec. 31 for good, and John says he's going to take some time to ponder his next step. He's not ready to retire, but he doesn't know what he'll do next. Spend a week with his wife, Mary, that's No. 1 on the bucket list.

"I kind of want to take some time and unwind and destress," John said. "I have a lot of emotions going through: excited, sad, nervous ... there's a lot of stuff, this is the only thing I've ever done my whole life."

His message to their loyal customers was to the point.

"Thank you for your patronage. Sorry we're closing."