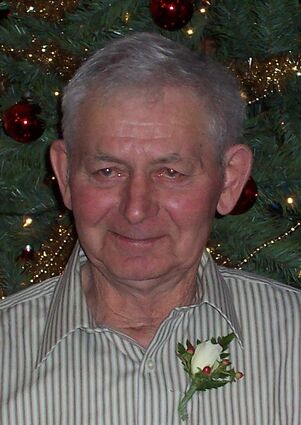 He was born Nov. 21, 1933, to Albert and Julia (Blegen) Hanson. He grew up in the Aitkin area, attending schools in Thor and Aitkin, graduating in 1952. After graduation he worked on several farms in North Dakota.

Ben worked as a lineman in Denver

Following the service, Ben returned to high-line construction, working for various contractors throughout the midwest. During layoffs, he worked the ore boats on the Great Lakes and cut pulpwood.

Ben married Joan Lee at the Little Brown Church in Nashua, Iowa, on Oct. 29, 1966. They settled in Wrenshall. He continued working construction intermittently while farming. He ran his dairy farm until the early 1990s, when he sold the dairy cows and switched to beef cattle. He enjoyed his draft horses and used them to skid firewood and saw logs for his sawmill. His passion was building structures - functional as well as unique - one being the "Uncle Henry" outhouse featuring its namesake as a plywood cutout sitting inside waving at passing cars on the county road. Paul Harvey once mentioned the outhouse on his radio program and told the story behind it.

He was preceded in death by his parents, Albert and Julia; sisters Joyce Dahle, Elaine Olson and Lois Johnson; and brothers, Chester Hanson and Lloyd Hanson.

A memorial service will be planned for the spring at Grace Church in Cloquet. Interment will be at Forest Cemetery in Kimberly, Minnesota.

The family would like to express their heartfelt appreciation to the staff at New Perspective and St. Croix Hospice for their compassionate care.