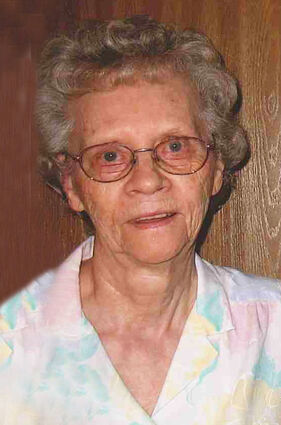 Eileen was born Aug. 22, 1926, to William and Mathilda (Jarvi) Bjorklund in Cloquet. She graduated from Cloquet High School in 1944. After high school she worked as a secretary and then attended Suomi College in Hancock, Michigan for two years. Returning to Cloquet, she again worked as a secretary until her marriage to Clifford Johnson of Esko on Dec. 6, 1947. For a time, they farmed in the Esko and Wrenshall area until 1954, when they moved back to Esko. Eileen was a lifetime member of St. Paul's Evangelical Lutheran Church in Cloquet. She enjoyed baking, crafts, flower and vegetable gardening, playing the piano, and finishing the daily crossword puzzle.

Eileen was preceded in death by her parents; her husband, Clifford; son Steve; and brother, Roy. She is survived by one son, C. Philip (Teri) of Esko; a daughter-in-law, Betty (Joe) Field and their daughters, Kelsey and Kayley; four grandchildren, Nathan of Esko, Aaron (Jessica) of Bigfork, Montana, Laura of Bigfork, and Travis (Joy) of Atlanta; and two great-grandchildren, Senya and Kaija also of Bigfork. The family would like to thank the staff at Evergreen Knoll, Community Memorial Hospital, and Sunnyside Health Care Center for their kindness and love show to Eileen.

A private family funeral will be held Jan. 2, 2021 at Nelson Funeral Care with interment service at Maple Grove Cemetery. To leave an online condolence, visit the guestbook at http://www.nelsonfuneralcare.net.