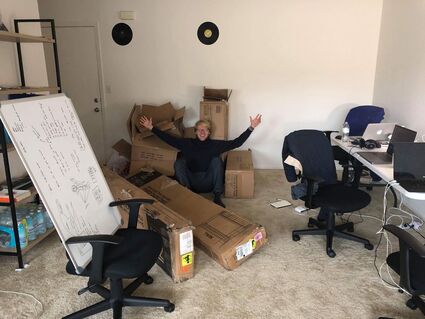 When Luke Heine first moved into an office in Silicon Valley, he slept on the floor until bunkbeds arrived.

Have you ever had a conversation with someone so intelligent that 10 minutes into the exchange, you start to feel inferior? That maybe you should have accomplished more in your lifetime? That is how my interview went with Luke Heine. After our two-hour talk, I needed two Tylenol to soothe my aching brain.

I looked up his name online just to see if I had missed anything. I found multiple stories of Luke's accomplishments. Did I mention he is only 26? Just out of curiosity I searched for my name. No stories, just my address.

I'm not quite sure how to describe Heine. He builds social networks, or something like that. Linked In calls him an "American software entrepreneur." He has been featured in a Forbes list as one of the 30 most influential people under the age of 30. He has been recognized in other publications such as TechCrunch, CrunchBase and NewCo. He has given talks at Harvard Medical School about how to gain access to colleges. He was a featured speaker in Seoul, South Korea. He was a keynote speaker in Amsterdam. He gave a report on who is making investments to a group of Dutch lawmakers at the mayor's home. He has traveled to many parts of the world already.

He speaks conversational Spanish. When I first called him, he was on the line with a Puerto Rican woman he hired to speak with him in Spanish for $10 an hour.

Yet the only degree he has so far is his 2013 high school diploma from Cloquet High School.

Heine is still a student at Harvard University, with one semester left to finish. Ivy League schools encourage their students to take leaves of absence to gain life experiences. Luke has done just that. This, from a guy who entered Harvard as a freshman chemistry major in the fall of 2013.

He must be a bookworm, right? He did say he used to hide under tables in the Harvard library on Friday nights when they closed early so he could keep working and drink the free coffee.

A non-existent social life? Hardly. Heine ran for student body president as a sophomore at Harvard. This typically is a post held by juniors and seniors. He lost. No problem. He just became a member of the Midwest Club. The Canada Club. A peer helper. A tutor in chemistry. A camp leader of an outdoor program where he takes kids camping.

For fun he takes lessons in capoeira, a Brazilian martial art-infused dance.

Those who knew Heine in high school could have seen this coming. His GPA was over 4.0. His class rank was No. 1. He had a 34 on the ACT. He was involved in student government, National Honor Society, Knowledge Bowl, Link Crew, the Scott Anderson Leadership Forum, cross country, tennis, pep band and musicals. But to him, his biggest thrill in high school was organizing the Northland Frisbee Invitational when he was 16 years old. It was the nation's largest charity Ultimate tournament with more than 200 participants, using fields at Hilltop, Braun and Pinehurst. The proceeds went to REACH, a nonprofit mentoring program in Carlton County. Heine shared an expression his dad always said to him that has stuck: "Being important is nice, but being nice is more important."

"Luke always had a presence about him. Such a big personality. He was bubbly, energetic and always smiling," she said. "He was involved in everything. He liked everyone and everyone liked him, yet he was so comfortable and never stuffy. I've been doing this job for 21 years and there are certain kids you will always remember. Luke is one of them."

Heine remembers not even considering going to Harvard because he didn't think he would be accepted. But Steve Fairbanks, Luke's social studies teacher, saw it differently. Fairbanks is an Ivy Leaguer himself, having graduated from Dartmouth.

"Ivy League schools are all about the desire to work hard and Luke was lightyears ahead of any of his peers at that age," Fairbanks said. "He would respond to being held to higher standards. He wanted to be challenged. He was super- charged intellectually. He's aware of his talents and abilities and he is living up to his. He is a tick off-center, and that is to everyone's benefit." Fairbanks continued to push Heine to apply to Harvard.

While his mom is hoping there is a graduation in sight for the now computer science and sociology major, Luke is busy hanging out with his business partner, Raphael Rouvinov, in Cambridge. At the moment they are focusing their attention on Duet, a social network for TikTok users.

"We have a big chunk of the world's biggest TikTokers on it right now," Heine said. Duet has about 500 million followers. The creators use Duet to meet each other, and Heine and Rouvinov also run brand deals on it where creators "essentially make commercials and we get a cut."

"My favorite thing is building things that people use and find cool and becoming a good engineer and designer as I go," Heine said. "It's super-creative, challenging, and a lot of fun. I also totally sleep in a bunk bed to keep the burn low for the company and live with my co-founder, which is the bomb."

Heine calls social consumer apps - Snapchat, TikTok, Instagram, Duet - "the wild, wild west" of the startup world, sharing that he and Raph got funding for their company from some well-known venture capital firms in Silicon Valley along with some of the earliest employees at Facebook and Google. It put their company's valuation in the millions.

"They [the investors] basically thought we had the right stuff to have a shot at cracking something big, and, in this space, even a 1-percent chance is pretty good and also where the math works out," Heine said. "And so we conserve the money, rapidly build and design, and just go as fast as we can. It's definitely a wild and weird job."

Heine is also part of two successful apps that he helps maintain: summerplaybook.com and fairopportunityproject.org. Playbook is a student travel website that allows users to seek out companions or travel tips. Users are encouraged to post stories of their adventures. During his freshman year in 2014, Luke developed it for Harvard students only. But now tens of thousands of people use it and it is in 126 countries. The travel app has gained national attention and received funding from Y Combinator, a company that has also funded Airbnb, Dropbox, DoorDash and Reddit.

Fair Opportunity is a college admissions and financial aid guide that Heine and fellow Harvard student Cole Scanlon designed in 2018. It has been sent to almost every public high school in the country, including Cloquet. More than 60,000 counselors and educators receive it. It is a how-to guide including topics such as: how to choose a college; how to fill out a college application; how to apply for financial aid and scholarships; how to write essays; how to choose the right courses in high school; and what summer jobs would be beneficial to colleges.

Heine was inspired after looking back at his college prep pathways. "School choice shouldn't come down to who you are born to or what your parents' income is," Heine said, 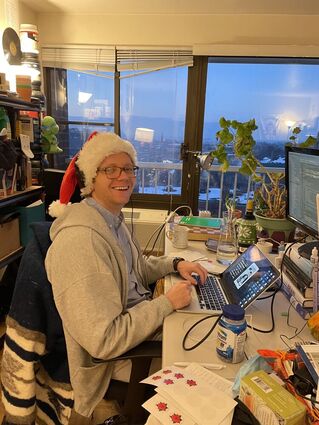 Quarantine during the holidays meant lots of time for coding for Luke Heine.

Luke just keeps designing websites and apps. He has another called Fanwave where you can get your favorite YouTube celebrity to call you and tape it for you. He has one looking at leasing rooftop solar panels.

Although it seems like he never rests, Heine said a good nine hours of sleep is the goal "or else I get grouchy."

"There is always more to do," Heine said. "Talking to users of the apps daily. Code changes. And daily design changes."

Cloquet High School economics teacher Tim Prosen refers to Luke as a sponge. "He wants to learn everything. He has the zest to be a lifelong learner."

I can't wait to see how Heine forges the future of tech. I'm sure it will be something fascinating. I'll just have to have someone explain it to me.

Greg Oakes is a retired school counselor and coach and freelance writer for the Pine Knot News.