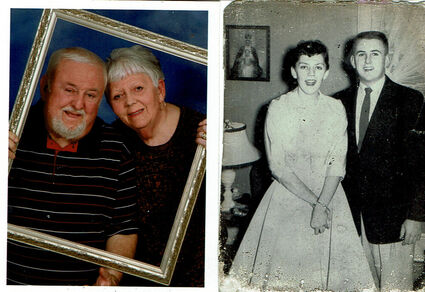 Jim and Judy Proulx were Cloquet natives who worked at the schools and raised three boys. They died in Arizona this month, on the same day, after bouts with Covid-19. Jim Proulx married Judy Weselik in 1959.

That's what Judy Proulx told her 60-something son last week when the thermometer he had purchased for her went on the blink. The impish gesture defined Jim Proulx's mother.

"I'm grounded for life," Jim said. He delivered a wistful laugh Wednesday because that joking exchange became the last between the mother and son.

"Romantic?" son Jim wondered from his winter home in Yuma, Arizona, where his parents also wintered.

"There's a romantic something there," said Tom Proulx, another of three sons the couple raised.

Jim and Judy were sweethearts since the ninth grade. Their families had cabins near each other on Big Lake.

Todd says he's never really nailed down how the two met or what the attraction was. Judy was an ace basketball player and only child to a city cop and eventual chief, Charles Weselik. Jim was the youngest son of a plumber who definitely "outkicked the coverage," Todd said, when it came to landing his mom. He was going through old photographs this week for a coming memorial service. Mom was a beauty, he said, and Dad was a lucky guy.

The three brothers had been preparing for the death of their father. Their parents, both in their 80s, contracted Covid-19 in December after flying down to Arizona for the winter. Jim was in and out of emergency rooms and the hospital. Doctors weren't able to nail down what exactly was ailing him at first, Jim said. But Covid "attacks what's wrong with you," and his dad, while a tough old guy, was flagging. He had blood clots and internal bleeding.

He was in so much pain, Todd said, that at one point he said he'd prefer if someone would just put him out of his misery. That's when the boys knew Dad might not be long for the world.

Judy had been doing OK since the Covid diagnosis. But as Jim's condition rollercoastered and it became more clear that he'd likely never come off the ventilator he was on, she lost hope, the sons said.

While dealing with the care of their dad, Jim told his brothers that Mom hadn't been taking care of herself. She was dehydrated. He decided to have her checked out. Because of a surge in Covid-19 in Arizona, the only way to get medical care was to call an ambulance, Jim said. Judy at first refused, then relented. Jim and his wife Vivian were relieved to see her go in.

Judy died on the way to the hospital.

Jim couldn't believe it. It was a shock.

Hours later, his dad, not knowing about his wife, lost his battle.

"I've heard of people willing themselves to die," Jim mused, not finishing his thought.

Jim Proulx was a longtime custodian for Cloquet schools and bus driver. To this day, people tell the Proulx boys stories about Bus No. 5. Todd went to games with his father as he carted around basketball and hockey teams.

Judy eventually would work as a paraprofessional in the district.

Having parents around at the schools was a blessing and a curse, Tom said. There was no getting away with anything. "Dad would always say it doesn't matter what it is, I will always believe the school over you."

The Proulx house became a favorite hangout for friends as Jim and Judy welcomed everyone and treated them like family, Todd said.

"Caring. Giving. Fun." Those were the words Tom brought up in describing his parents.

Todd got a note from an old friend reminiscing about "outrageous times we spent in the den and numerous times Jim or Judy would join in and whoop it up with the rest of us." The friend noted how he would run into the couple later in life and the conversation picking up right where it left off in the early 1980s. "Jim and Judy were truly two of the best I've come across in this journey through life."

Kim Marciniak of Cloquet sent a note to the family in an online guestbook. "Time spent in 'the den' shaped many of us as young adults and Jim and Judy were always the heart of it. Their open house, big hearts and humor were legendary, only eclipsed by the enduring marriage of these true, true soul mates."

The couple loved to travel in the summers with time off from school. The boys remember epic camping trips lasting a month, with visits to amusement parks and a growing list of friends from across the country. 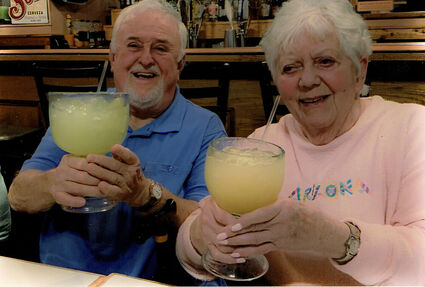 A whole new pack of friends was formed in the retirement community in Yuma. Jim said his father left some money "to take everyone out to eat." They did that this week. He said it was a nice tribute. It included gifts of roses and $2 bills. Those Jefferson bills were of inexplicable interest to his dad. Seeing those brought tears, Jim said.

The couple is coming home to Cloquet. There will be services beginning at 2 p.m. on Jan. 29 at Queen of Peace Catholic Church in Cloquet. The couple's obituary is on

Todd wondered if it was a slow news week that a local paper was going to do a story on his parents. Jim and Judy's jovial and joking manner obviously rubbed off onto their sons.

Todd paused for a few seconds and was asked about the angle of two longtime sweethearts going out on the same day, just hours apart. That was something, he thought.

"If you're going to have a story, it's the right one to have."