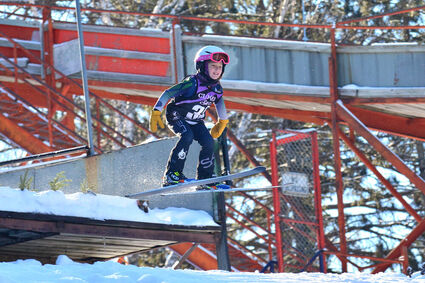 Ellia Antus of Cloquet is all smiles as she makes a jump off the 20-meter ski jump during Sunday's Central Division ski jumping meet at Pine Valley in Cloquet. Find more photos and video at PineKnotNews.com.

Sunday was a nearly perfect day for ski jumping at Pine Valley, just in time for the biggest home meet of the year. The jumping hills were a pristine white, thanks to a fresh coat of snow the night before. They were perfectly groomed, thanks to many (mostly) parent volunteers. The sky was blue, and, every once in a while, more snow would blow out of the tree tops, sparkling in the sun as it floated down on an 18-degree day.

Jumpers came to Cloquet to celebrate National Ski Jumping Day Saturday and, more importantly, to compete in the Central Ski Jumping and Nordic combined meet the next day. The parking lot at Pine Valley was filled with local cars and others with license plate holders and stickers indicating travel from Coleraine, St. Paul, Minneapolis, Eau Claire, Wisconsin and Ishpeming, Michigan - all home to clubs in the Central Division. There were about 60 entries, with many kids jumping in more than one event.

That number is up to 70 jumpers now, according to Jon Waugh, who spent Sunday inside the chalet, entering jumping scores into a computer as runners came in with judging sheets. Waugh has been part of a core group of parents at the club - including the Ripps and the Marciniaks - for nearly two decades. Participation has waxed and waned over the years.

Two of those girls, Aubrey Linden, 6, and Rowan Rockenstein, 7, were nearby, watching teammates and others go off the 20-meter jump, chanting "Franny, Franny, Franny" when it was 6-year-old Frances Langer's turn.

Outside, close to 10 adults and kids lined the steps along the 20-meter landing, peering up at the jump, waiting for the next competitor to launch themselves and fly down the hill. Tiny pine tree limbs were stuck in the snow to provide contrast and help mark the number of feet each jumper managed to fly before their skis touched the snow, sometimes with a loud slap on the snow.

At least one skier, 9-year-old Simon Langer, landed and then tumbled a few feet down the landing to gasps from the crowd before getting up and skiing over the tow rope with no sign that anything was amiss.

"That is a misconception - there are very few injuries in ski jumping," said Simon's dad, Nathan Langer, the newest ski coach at the Cloquet Ski Club. He said that although jumping skis are much longer than alpine skis, they are also built to fall off when a skier falls, which also helps avoid injuries.

During Sunday's competition, the youngest skiers went first jumping the 5-meter (the length of the run, not the height of the jump), which was basically a little bump in the snow behind the chalet. Parents were clapping and standing guard below to make sure no one ran into a nearby light post.

Next up it was the 10-meter jump on the big hill, the run twice as long but still made out of snow and not too scary.

The 20-meter jump followed, with 18 kids jumping twice, climbing up the metal structure and then zooming back down, crouching low on the run and then springing off the end of the jump, trying for skis in a V-shape, arms back, head up, trying to delay the landing as long as possible.

All three of the Langer children jump: Frances, Simon and Isaiah, the oldest at age 11.

"I love that the kids ski jump. I can't think of a better sport for them," their dad said. "They get outside, make good friends, meet kids from around the Midwest."

Silas Maki, age 7, came up from St. Paul for the day. It was his first visit to Cloquet.

"I like it because you can actually kind of fly without any engines," Maki said before racing off when the announcer said it was time for the 10-meter jump.

Langer admitted he was a little apprehensive when he first found out about the sport. But then the family went to watch a meet, including mom, Veronica Gaidelis-Langer. They never looked back. That was six years ago.

"I also love that it's a legitimate challenge that they can overcome," Nathan said. "And just teaching them that they can do hard things is such an amazing lifelong skill."

The parents have become good friends, Langer said. And the newer parents have picked up many of the organizational challenges of keeping the club going along with other volunteer duties.

One of those is Leah Schul Peterson, who has vastly improved the organization of the club, Langer said, along with helping to coach the Nordic skiers.

With 160 kids signed up for the Sunday afternoon cross country skiing, Peterson said she had to get things more organized. In addition to the usual coaches, she has community members and high school students lined up to work with the kids every Sunday.

She also got the club's nonprofit status back and has applied for numerous grants, including a $3,000 grant from the Young Athletes Foundation in Duluth, which helped pay for a lot of smaller jumping skis for the younger skiers along with additional Nordic equipment.

The various grants and donations also help keep the club affordable for jumpers and Nordic skiers. Including membership and equipment rental for the season, it costs anywhere from $45 to $70 a year for a kid to participate, a far lower investment than most kids' sports. 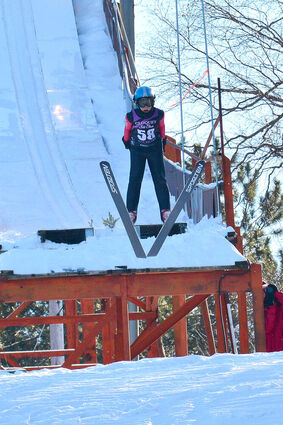 Bradyn School of Coleraine glides off the end of the 40-meter ski jump.

Mary Hagen was there Sunday, representing the Sons of Norway, another organization that has supported the club with grants in the past. Watching the young skiers shoot off the ski jumps brought back memories of growing up in Cloquet, Hagen said, warming herself by a fire pit between the two jumping hills.

"That's when the Nelsons and the Quinns were out here jumping," Hagen said of the jumping stars of the past. She said her dad talked her into going off the 20-meter jump twice, but that was both the start and end of her ski jumping career. "I remember watching the Olympics, and thinking I want to do that (ski jump) but, of course, it was only men then. But this is where it starts."

And with women's ski jumping as part of the Olympics since 2014, all those girls in the club can now follow their dreams as far as the boys can.