After winning 15 state awards after its first full year of operation, the Pine Knot News doubled its haul last week, collecting 33 awards from the Minnesota Newspaper Association through its annual contest judging newspapers for overall quality.

The unprecedented number of awards means the Pine Knot office now holds the Mills Trophy from MNA as the "Minnesota's most outstanding weekly newspaper."

The trophy has been in the hands of just a few papers the size of the Pine Knot in the 40 years it has been handed out. And the newspaper is certainly the youngest to earn the top prize in the state.

"People thought we were crazy to start a new newspaper in this day and age," said publisher Pete Radosevich after the awards were announced Jan. 28. "But with editor Jana Peterson leading the way, our paper is not only surviving, it's thriving."

Peterson said the paper is truly a team effort, including "incredibly dedicated staff and lots of community members who write, take photos and otherwise contribute to bring many voices to the small hyperlocal community newspaper."

"We are very lucky to have the staff members we have, with all their years of experience and amazing talent," she said.

On its way to earn the trophy, the Pine Knot won the most coveted contest category, that of "General Excellence." The contest is judged by journalists from out of state. MNA rotates judging with other associations in the Midwest. This year's judges came from Michigan. The Pine Knot also won a bevy of top reporting awards, among 15 first places awarded by the judges. 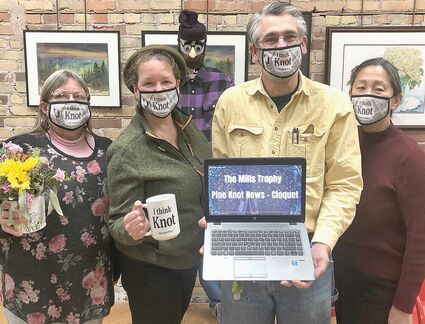 Peterson remains in awe of the accolades. "If you had told me that we would win the Mills Trophy in our third year of existence back in 2018, I would have said: Yeah, and we'll have a worldwide pandemic as well. Heck, I would have been thrilled to just know that we would still be alive and growing in 2021."

The awards were announced online because MNA members did not meet for an annual convention that usually takes place at the end of January. The pandemic made the announcement of the awards as unusual as the Pine Knot's win.

And when people can meet in large groups again, Peterson promises a large party at the newspaper's West End office, celebrating with readers and advertisers.

"Our goal is to give northern Carlton County the local newspaper it deserves," Peterson said. "And I think we have. We work hard every single week. And then we do it all over again the next week. But we don't do it alone. While our staff of five and owners (some of us are both) work hard to build a great paper every week, we get lots of help from the community."