A tough slog on the sled dog trail 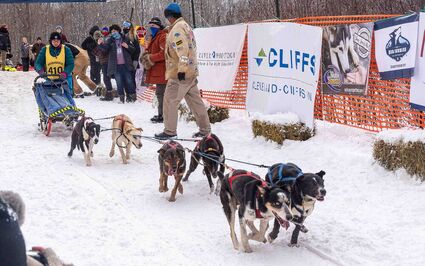 Covid-19 forced Cloquet's Billie Thompson into the Beargrease 40 race this year. The neuro-trauma nurse had planned to return to racing the mid-distance Beargrease 120, but she got Covid in December and is still not fully recovered.

"That put me out of training for a couple of weeks obviously still dealing with the side effects," Thompson said, mentioning ongoing shortness of breath. "I just didn't feel like I would have been able to safely take my team 120 miles this year so we came down to the 40 at the last minute."

Thompson and her dogs completed the 40-mile race in 3 hours, 46 minutes and six seconds, good enough for third place in a field of 18 mushers.

Covid also impacted the Beargrease race itself this year, as no spectators were allowed. That reality was a mixed bag, Thompson said, giving racers more space, but also seriously affecting the vibe of the start of the popular sled races.

"The one thing that was really hard was that the start is normally so full of energy and the fans really hype us up and everyone is counting '3 - 2 - 1,' and this year there was one timer," she said, mimicking a tiny little voice counting backward from three. "So we definitely missed the fans. But it was nice we could still see some people out on the trail, like snowmobilers and families."

Thompson said motherhood - she and husband Cameron have two girls under the age of 5 - has forced her to slow down a little bit in recent years, but she had hoped to get back into the 120-mile race this year.

But there's always next year, right?

Mushing is a way of life for Thompson: Her kennel partner Richard Loucks (of Rock Creek Kennel in Wrenshall) got her started when she was 7 years old - 24 years ago. He and her mother, Betsy Diver, are her dog handlers. Between the three of them, they make sure the 20-some dogs get a workout most winter days.

In the summer, the dogs get to roam a large 2-acre area that's fenced in. 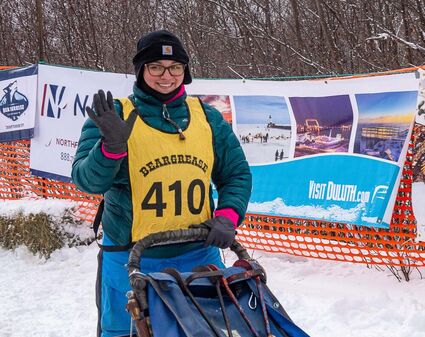 Thompson fought through a battle with Covid-19 before this week's race up the North Shore.

"It's usually too hot to hook them up to a four-wheeler and train, but there's a lot of free running or walks in the woods or swimming to keep them in shape," she said.

"The dogs are obviously my favorite part, the relationships that you form with them and getting to know their personalities and stuff," Thompson said. "Otherwise, I enjoy just being on the trail with them."

As for those two little girls she is raising with her husband, Cameron, they have very different thoughts on dogs and mushing.