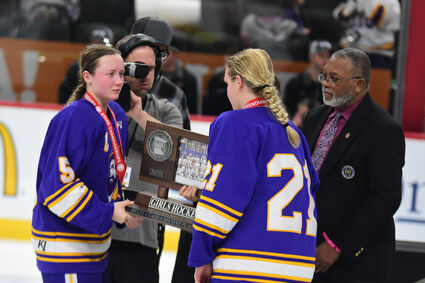 The CEC girls hockey team won second place in the Class A state girls hockey tournament in 2021. They'd like to get back there this year.

Plans for championship experiences were approved today during the Minnesota State High School League's Board of Directors meeting that was held in a virtual format, according to the following press release from the MSHSL.

The Board of Directors supported a conceptual postseason plan for the winter tournament season that includes state tournament dates and formats. Under the projected plan, a five-week run of state tournament events would begin with Dance on March 12 and end with basketball championship games on April 10. The Board of Directors previously tasked League Staff with creating a framework of culminating postseason events. League Staff did so with the assistance of the League's Sports Medicine Advisory Committee, activities advisories, region secretaries and tournament managers.

"The board unanimously approved moving forward with postseason tournaments and directed the staff to proceed with organizing tournaments in a context that is safe, adheres to the governor's executive orders, and follows the guidelines set forth by the Minnesota Department of Health," said Board President Blaine Novak, superintendent of schools in New York Mills.

With each activity beginning postseason play at the section level, these events will continue to progress to a state tournament. While details of state tournaments continue to be formulated, here is a projected look at each remaining winter activity:

Alpine Skiing --- The event is tentatively scheduled for Giants Ridge Golf and Ski Resort on Wednesday, March 10. It will be a one-day event with 88 skiers per gender participating. Pods of 22 skiers will compete in four different waves. Each skier competes in two races.

Dance --- The event is tentatively scheduled for Edina High School on Friday, March 12 (Jazz) and Saturday, March 13 (High Kick). It will be a single-day event for each category with a single dance per day. Each day will start with Class AAA.

Boys Swimming and Diving --- This three-day event is tentatively scheduled to be held at the Jean K. Freeman Aquatic Center on the University of Minnesota campus beginning with diving on Thursday, March 18. No swimming preliminaries will be held, rather timed swimming finals will be held Friday, March 19 and Saturday, March 20 with one class per day. A maximum of four sections will be competing at any one time.

Wrestling --- A three-day event scheduled for March 25-27 will be held at a venue to be determined. Each class will have its own day of competition. The state tournament format at the final venue will feature four qualifying teams that advance from team state preliminaries, held regionally, on March 13. In the individual tournament, eight qualifiers in each weight class will advance to the final venue.

To monitor updated information on tournaments as it becomes available, please see the League website at http://www.mshsl.org

"The League is thrilled that students will have the opportunity to have a culminating state tournament experience," said Erich Martens, Executive Director of the Minnesota State High School League. "Providing a championship event in every activity is part of Minnesota's rich tradition of co-curricular opportunities. Safety is, and needs to continue to be, a focus as the League and its partners continue to work on these projected postseason concepts. We are strongly encouraged that we will be back together in a state tournament environment. These are incredibly special experiences and we are looking forward to celebrating with the participants and our member schools."

In other decisions, the Board of Directors, in a roll call vote:

Approved an Executive Committee motion for a proposed resolution for a revision of the League Constitution would create two positions on the League's Board of Directors earmarked for superintendents. The resolution will move to a vote of member schools to take place between Feb. 22, 2021 through March 5, 2021.

"The board recognizes the value the superintendent's voice brings to this board and is proactively working toward securing consistent representation in the leadership of the MSHSL," Novak said.

Approved a recommendation from the Marketing and Communications committee to enter into a partnership agreement with Hudl as the League's exclusive provider of video analysis and exchange.

Approved the newest version of the Post COVID-19 Return to Sport protocol for participants and schools. This document was developed through the League's Sports Medicine Advisory Committee and MSHSL Staff.