Retiring firefighter gets a grand goodbye 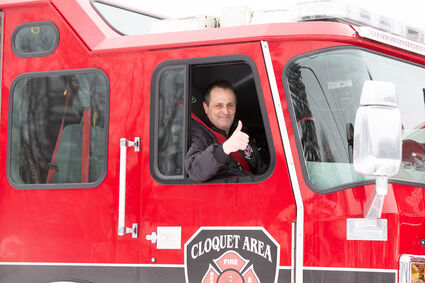 Sean Saddler went through a rollercoaster of emotions Thursday ... and then he went for a ride in a fire truck.

Retirement is bittersweet, said the firefighter of 33 years.

"This is my family and I'm gonna miss them," he said, gesturing at the gymnasium filled with upward of 30 people, most of them firefighters and emergency responders. "It's hard to leave the guys, it really is. I won't miss the job as much, since they've already told me the welcome mat will be out and I can come cook a meal now and then."

He thanked his late mother and the Minnesota Lottery - he won $100,000 - for shaving a year off his career, allowing him to retire a week before his 52nd birthday.

Last year was a tough year, Saddler said. Change is one of the most difficult things about the job, and Covid brought the biggest changes in one year that he can recall in more than three decades of firefighting.

"But we adapt and overcome," he said. "There's some really great people in this room."

Not all of the crowd Thursday were from the Cloquet Area Fire District, Saddler's home for 23 years. Some firefighters from neighboring fire departments came, so did Saddler's father, and Sherry Richardson - who said she owed her life to Saddler.

They met the night the Iverson Inn burned down, Richardson said, when she had a severe asthma attack and called an ambulance. "My heart stopped [in the ambulance] going down the hill to Duluth. He saved my life. I thank him every day and my children do too.

"I will never forget you," she added, giving Saddler a hug. 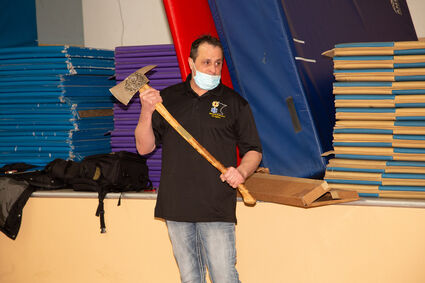 Sean Saddler received an honorary retirement ax from the local firefighters union. He had a 33-year career, 23 of them with the Cloquet Area Fire District.

Saddler worked for 10 years in the Oakdale Fire Department, then completed an intensive care paramedic course and became a full-time paramedic with Gold Cross in Lacrosse, Wisconsin. He came to Cloquet in 1998. In addition to his firefighting and paramedic duties here, Saddler was also the secretary/treasurer for International Association of Fire Fighters Local 880 for 21 years, the longest tenure in the history of the local union, he claimed. For that he received a plaque, an ax with the IAFF shield, and emeritus status. Other retirement gifts included his helmet - and a ride home in a big red firetruck.

It was the inaugural ride: the first of a new tradition for retiring firefighter/paramedics at the CAFD.

"The camaraderie, the friendships and the brotherhood I will take to the grave," Saddler told his fellow firefighters.