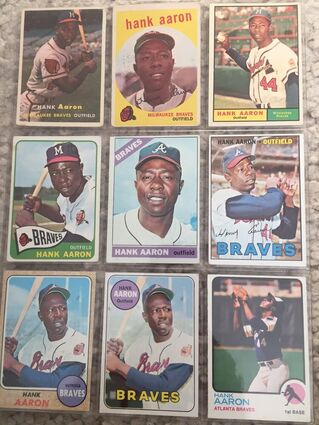 I was sad when I learned that baseball legend Henry Aaron had passed away. He was one of my favorite baseball heroes from the 1950s, '60s, and '70s. I read now and am reminded of the terrible discrimination he faced his entire life. His death occurring near Martin Luther King, Jr. Day and the Presidential Inauguration just heightened the awareness and challenges facing all of us and the need for social change.

Aaron grew up in the Deep South in Mobile, Alabama. He was 86, so his roots go back to the 1930s. He remembers his mother telling him to go and hide underneath his bed when the Ku Klux Klan was approaching and marching down his street. Aaron also remembered telling his Dad that he wanted to be an airline pilot when he grew up. His Dad told him to forget it -- that there were no pilots of black ethnicity. He also told his Dad that he wanted to be a Major League Baseball player and got the same response from his Dad. That changed in 1947, when Jackie Robinson became the first player of color to play in MLB and opened the door and dreams for Aaron and many other young black and Latino players.

What still seems puzzling and shameful to me is how much hate mail Henry Aaron received, in particular, in the off season just prior to his breaking Babe Ruth's career home run record. I remember watching the tie breaking game on TV in April in the 1970'. It was an evening game and on National TV, highly unusual. This was a big deal. The Braves were playing the Dodgers in Atlanta. I thought nearly everyone was rooting for Hank. I sure was. Truth is, there were many Americans that couldn't bear to see a black man from the Deep South beat the immortal and white Babe Ruth's seemingly insurmountable record. Why'd they (the mean letter writers) care? Did they think that whites were superior or that it would tarnish Ruth's record? And letters were not just from people from the Deep South either ... Aaron probably got racist letters sent from Minnesota and maybe even from the Cloquet/Carlton County area, I fear.

Aaron is rightfully in the discussion of the greatest players of all time, yet, with no flamboyance and playing in "smaller" markets in Milwaukee and Atlanta, he was low key and under appreciated.

Here are some stats that pop out:

- He played over 20 years in Major League Baseball and played in over 20 All Star games. He had over 20 years in a row with over 20 homeruns. He avoided injuries and was the model of consistency (Aaron played from ages 20-42)

- Even taking away Aaron's homerun total, he had over 3,000 lifetime hits. This is a pinnacle only achieved by 32 in the history of Major League Baseball. Aaron ranks third all time in hit totals behind Pete Rose and Ty Cobb.

- Many, in reviewing Aaron's record, didn't realize he was a speedy athlete and excellent base runner and outfielder. He won three Gold Glove awards for fielding and several seasons stole over 20 bases.

- Aaron had a lifetime batting average of over .300 which is tremendous for a slugger. However, he never struck out more than 100 times in a season. His high was 97 in 600 at bats. Compare that to the current Minnesota Twins young slugger Miguel Sano who had 90 strikeouts in 53 games, 186 at bats, in last year's 2020-shortened season.

- Henry always took pride in knocking in base runners in that were in scoring position with less than two outs. His career runs batted in total is No. 1 in MLB history

Spending nearly all of my working life in Human Resources and Labor Relations, I have had many hours of training in diversity, fair selection processes, recruiting minorities, recognizing bias and prejudice, writing Affirmative Action plans, ..... and still I know I have a long ways to go in learning about different cultures and practices and the social justice spectrum.

Aaron was treated unfairly and he said it chipped away at his heart when he saw the many threatening letters for him and his family. He tried not to be bitter. His wish was that all Americans could treat their fellow citizens with respect, listen to all, and be helpful to neighbors. We've seen many of these acts of kindness during the pandemic and its been heartwarming. Hopefully, these practices will continue and even expand in the future.

Carlton County residents and others are invited to join an online series of conversations about equity, diversity and inclusion across the county on the fourth Tuesday of each month starting Feb. 23.

Called “Niibidoon: Relationship Weaving,” the two-hour conversations will be held online via Zoom and are open to all community members. The interactive talks will be facilitated by U of M Extension's American Indian Leadership and Civic Engagement team.

Following is the schedule through June:

-Exploring Unconscious and Implicit Bias, ​May 25

Contact Mandi at 218-384-8670 with questions. Pre-registration is required at: https://umn.zoom.us/meeting/register/tJYrc-GqqzktG9MsjpuVzx4kCoVb_LQnNBDS