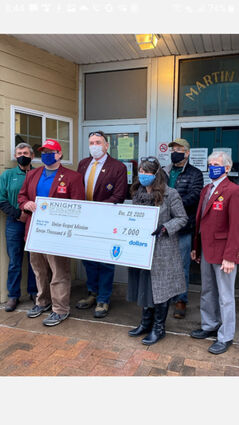 The Knights of Columbus puts faith into action by service and helping the poor and people in need. In December, 10 Knights councils in the region conducted a drive to raise funds for the Union Gospel Mission of Duluth, which was in desperate needs of money to serve a growing number of hungry in Duluth due to the lack of regular donations during the ongoing pandemic. Led by district deputies Paul Sever, Jeff Nelson and Bob Spehar, the order raised $7,000. A check was presented to Sue Jordahl-Bubaez, the Union Gospel's executive director. Pictured, from left, are Dave Antus, Jeff Nelson, Paul...