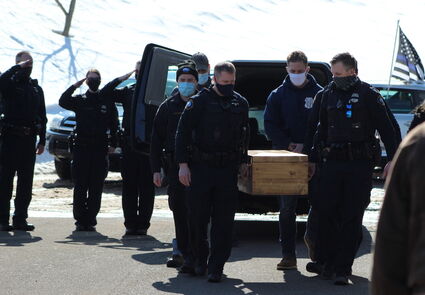 Duluth K-9 Luna, who was killed in a standoff Thursday. People lined the route from a pet hospital in West Duluth and gathered on overpasses between there and the pet crematorium in Scanlon to pay their respects.

This weekend marked the second time in three years that a procession to honor a Duluth police dog killed in the line of duty has ended in Scanlon.

On Saturday, a long line of people stood along the roadsides overlooking Fur-ever Loved Pet Cremation Services, as a massive line of police cars and others followed the hearse holding K-9 Luna's remains from Duluth to Scanlon. Members of the Cloquet and Fond du Lac honor guards - and service dog Purity - joined the many police officers from Duluth and across the region for the brief ceremonies and a procession line outside the pet crematorium.

People started arriving on the embankment overlooking Scanlon Way at least an hour before the ceremony to honor Luna. Tad Wood and his German shepherd Roxie waited with Mac Coppage and 2-year-old Hudson, watching the procession on their cell phones as it was livestreamed on the Duluth Police Department Facebook page, waiting to pay their respects. Heather Wait and her children did the same, both kids holding handwritten signs that read "All dogs go to heaven."

Wait is a corrections officer at the prison in Moose Lake. "So this kind of hits close to home," she said.

Before the funeral procession arrived, Casey Modich helped his 4-year-old daughter down the snow-covered hill so she could deliver her hand-drawn card and envelope to Luna. "I put a little rainbow inside," said Clementine Modich. A bouquet of flowers and a dog bone sat on the window inside Fur-ever Loved.

"I was there after Haas was killed, now we're coming to pay our respects to K-9 Luna and officer Haller and his family," said Allen, an officer at the Arrowhead Juvenile Center in Duluth. "I think it's important because not only is it the second time the family has gone through this, I want to show support for law enforcement because they've been getting such a bad time. And it's easier to go through grief in numbers than alone."

Bob Atkins - who owns both Fur-ever Loved and Atkins-Northland Funeral Home with his wife, Karen - said he took the casket to Duluth's BluePearl pet hospital as soon as he heard about Luna's death.

"An officer stays with the dog's body 24/7 until the dog is removed," he said. "And I knew handler Aaron Haller would be coming there too, so we wanted the viewing to be in a casket. I went over there a couple times to make sure everything was OK."

Atkins said the streets were packed with people along the Duluth route from the pet hospital, and more people with flags and fire trucks were gathered on the frontage roads and bridges crossing Interstate 35. "People driving north on I-35 were even pulling over to pay their respects," he said. 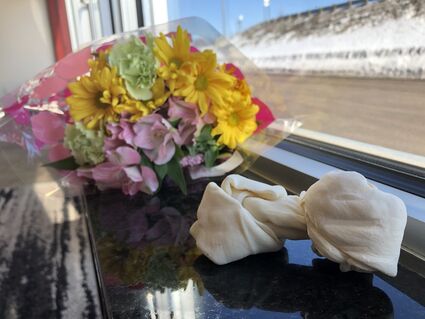 A pet lover who served on the Friends of Animals board of directors for nearly two decades, Atkins built the pet crematorium and an adjacent crematorium for human remains in 2018 along the quiet dead-end road in Scanlon. They built Fur-ever Loved to be more than a crematorium: it has a living room area where families can say goodbye to a pet, and wait during the cremation to pick up the remains. Since they opened, he said they've cremated more than 6,500 animals, with 4,600 of those being private services - one at a time - where the family gets the remains of their pet back.

While it is gratifying to be able to help families grieve the loss of a beloved pet or police officers mourn a trusted partner, Atkins said the crew at BluePearl deserve real kudos in the case of the Duluth K-9. "They tried to save Luna's life. They are the ones who went above and beyond."

As for Atkins, who kept things running smoothly Saturday as dozens of family, friends and police officers came together to mourn, it's all part of the job.

"It was a privilege to be there," he said.