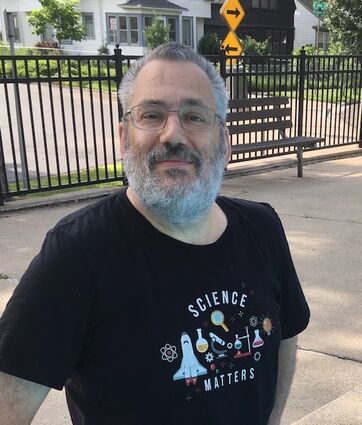 Bill Radosevich, 58, of south Minneapolis died at home on March 9, 2021. Bill was a brilliant, funny, kindhearted scientist whose curiosity and intellect guided him through a life of fun, adventure, and accomplishment.

Bill was born in Duluth to Tony and Marg Radosevich (Lubina) and raised in Two Harbors, moving to the Twin Cities as a young man and settling in south Minneapolis.

Professionally he was a national expert on lead poisoning, working for Niton Corporation and Thermo Fisher Scientific, the City of Minneapolis Department of Health. Other favorite gigs included working fish in Alaska, fixing video games, and years at the State Fair Penny Arcade. He was an “Expert-at-Large”. He was the cofounder of the International Slivovitz Association and co-host of the Slivovitz Tasting Festival (with brothers Pete and Todd) for many years.

He became disabled in 2010 and suffered painful neurologic and cognitive complications from celiac disease until his death.

He was also an avid traveler; as a young man he hitchhiked collecting experiences, and tales that amused us for years. In his family-kid years and then in his later years with Terre, traveling the country in his well-loved Born Free RVs.

He was pleased and proud of his children and he had a gift for making people feel appreciated, loved and “in on the fun.” Science experiments were his lifelong pursuit, using his voluminous knowledge of scientific info (chemistry, physics, biology, astronomy, computers, and more) combined with his cleverness, insatiable curiosity, and sense of humor. He was a great husband, dad, grandpa, brother, uncle, and friend.

He believed when he passed he was going to the big Library in Heaven and was confident we would all meet up there again. A memorial service will be held on Sunday, August 29, at 1 p.m. (He insisted that we wait til it was Covid-safe) at Beards Plaisance at Lake Harriet in Minneapolis. Memorial donations for a MN State Fair bench with his name: https://gofund.me/b0f41f16 More memorial service details, photos, and remembrances at http://www.CrescentTide.com.