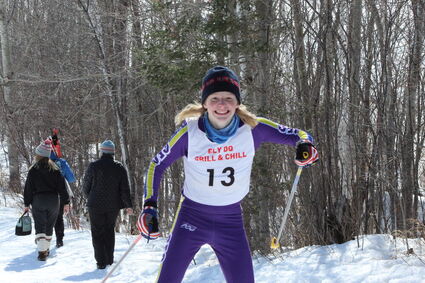 In a two-part Section 7 Nordic ski race with a team trip to state on the line, the entire boys varsity team helped get the Cloquet-Esko-Carlton boys team its second consecutive trip to state, even the three who didn't actually score.

It's a convoluted story, but just know that the first-place finisher gets 100 points, second place gets 99 and so on. Oh, and only the top two teams advance to state, and only the top four finishers from each team score.

Following the classic race at Giants Ridge on March 3, the Lumberjacks were in third place, five points behind Ely. Things were tense, but CEC had a plan: Everyone needed to do better in the second race, and even the non-scoring skiers needed to try to beat Ely's fourth man.

And they did. All seven of the boys in purple finished ahead of the last Ely skier in the skate-style race. In the end, Cloquet gained a six-point advantage, enough to beat Ely by one point overall.

But it could be said that one Lumberjack stepped up the most: sophomore Miles Fischer.

"Miles was definitely one of the big heroes of that race," teammate AJ Maijala said.

In his second year on varsity and third year of skiing, Fischer went from fifth on the team to fourth during the Section 7 meet by turning in his best skate race of the year, passing Ely's fourth skier and almost catching their third skier. (Fischer was one-tenth of a second behind Ely's third skier, Jon Hakala, in the overall results.)

"Obviously Benjamin led our team, but Miles really showed up in that race and gave us that push," teammate Henry Slater said. "It was way more stressful [this year] because we really had to fight for our spot to go to state."

Of course, there were three skiers on the Lumberjacks team who did even better last week in terms of overall times. Benjamin Bauer took third place overall, while Josh Sanders took 13th and Cale Prosen finished in 14th. Fischer placed 18th overall for CEC, followed by AJ Maijala in 19th, Henry Slater in 27th and Jordan Chopskie in 30th. Maijala also beat Ely's fourth skier in the combined results. Alternates on the section and state team are Nate Bong and Bennett Hille.

Coach Maijala said Cloquet had to beat Ely, because Ely would have won if the two teams had tied. In case of a tie, race officials add up the times for the top four skiers, and whoever has the lowest number wins.

"So Ely actually would have won a tie because their top skier, Jasper Johnston, is quite amazing. Like a good maybe 30-50 seconds ahead of most of the top skiers," Maijala said. "So it was good we actually beat them and it wasn't a tie."

"I had a good race, but I think we all had our best races of the season," he said.

Coach Maijala agreed, saying he thought maybe all of the skiers set their own personal records, but it's impossible to compare because the races have all been so different this year, in terms of distance, conditions and racing styles.

Junior Cale Prosen said a pep talk - "keep your head space" - from assistant coach Tim Stark was helpful, as well as "just holding our confidence strong and fighting, not giving up."

This is the second year in a row that the same CEC boys have advanced to state as a team. It's the third year for Bauer and Sanders.

That should play in the Lumberjacks' favor, Maijala said, predicting that experience will help his skiers perform well at the state meet this Friday, along with the "championship environment" of competing against the state's top skiers.

"I think they're just going to be able to go out there and ski their best races," he said, "as long as everyone is healthy."

For the first time in four years, the Lumberjacks girls team is sending a skier to state. Esko junior Halle Zuck advanced after taking 14th place at sections.

Like the boys team, Zuck didn't find out she was going to state until long after her race was done. Because of Covid, the races were timed, instead of the second race being a pursuit race like it usually is (which means racers start in the place they finished the first race, so they finish in order). That meant every skier, coach and parent at last week's section meet was constantly refreshing their phone to look for updated results. The boys learned the joy of their victory during the girls race. Zuck didn't find out until she was on the bus headed home from the meet, thinking she hadn't made the cut.

"The end of it was kind of odd, there was no ceremony," Zuck said. "So I left thinking I didn't make it and then all of a sudden Henry was like, 'Halle, you made it.' All the boys turned around. It was so cool."

This is only Zuck's second year on the Nordic team, although she's been cross country skiing since she was a little girl. Zuck thought she wanted to be an alpine skier and was on the CEC team as a freshman, but then she decided to try Nordic her sophomore year, following in her big sister Hannah's footsteps.

She loves being outside and seeing wildlife while she's on the trails.

"At the Ely meet I think I saw eight deer," Zuck said. "Plus I just love the energy ... and I love the fact that I'm finally able to be a part of it, after seeing it from the sidelines so much all those years my sister was on the team."

Earlier this week, officials at Giants Ridge ski resort in Biwabik were carting snow back to parts of the trail that were melting fast in preparation for the state Nordic meets on Thursday for the girls and Friday for the boys.

But then the weather reports came out Tuesday. Volunteer coach Ben Croft heard it on his car radio driving away from practice and turned around to share the good news: Giants Ridge could get as much as 10 inches of snow Wednesday and Thursday, and temperatures were supposed to stay below freezing on Friday.

It was already snowing as the Pine Knot News went to press Wednesday night. 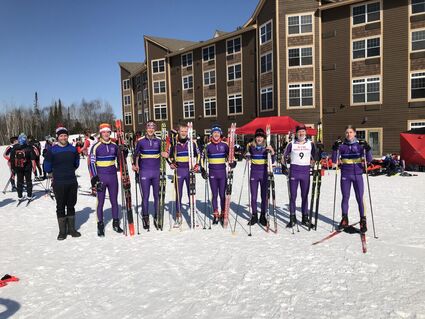 Zuck said she'd be OK with snow while she's racing, and Bauer was cautiously optimistic about the forecast for Friday. "If they get kind of a rain, sleet snow mix, and then it freezes overnight for us and they groom it up, the snow could be crystalline like artificial snow. Then the race could be extremely fast."

It will be different from past years because of Covid -they can't stay overnight the day before and it's not a pursuit race - but the skiers all agreed they're just happy to be going.

Look in next week's Pine Knot News for the state meet story, or online at