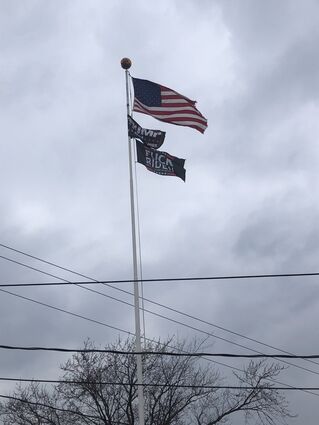 Political flags using expletives are on display below an American flag at 22nd Street and Doddridge Avenue in Scanlon. The flags have caused a stir, especially among veterans.

Political flags flying in Scanlon underneath an American flag have caused a lot of consternation in the community. At the corner of 22nd Street and Doddridge Avenue, which runs along the border between Scanlon and Cloquet, is a tall flagpole next to a home. It has three flags. At top is the American flag, second is a "Trump 2024" flag stating "F*ck your feelings," and third is a flag that says "F*ck Biden" and "F*ck you for voting for him."

The Pine Knot News chose to not explicitly spell out the words as seen on the flags, replacing the letter "U" with an asterisk.

The expletives on the fl...