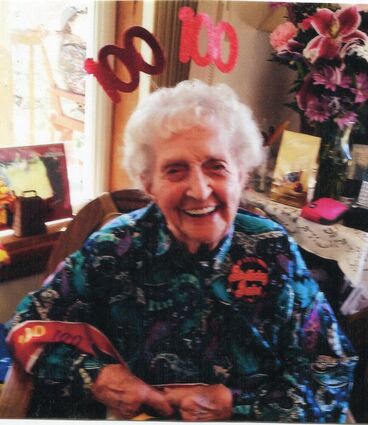 The Northland lost one of its oldest residents last month, when Martha Adeline Westlund passed away at the age of 105 on March 6 of natural causes.

Westlund had become quite a celebrity in her golden years, most recently for being the oldest person to receive a Covid-19 vaccination at Community Memorial Hospital in Cloquet on Feb. 5, when she made the local television news and was featured in a Pine Knot vaccination story on Feb. 12. Martha was looking forward to the resumption of the annual centenarian birthday party at the Duluth Entertainment and Convention Center, her son Tim Westlund told the Pine Knot News in February.

While her health was not perfect, Westlund had a keen mind and could remember many moments from her long life, including the 1918 fire when she was 3 years old. She recalled her family packing up to flee the impending fire before the wind shifted. According to her obituary, Westlund told of being put in the horse carriage along with trunks of belongings for a hasty getaway and the great fortune when the devastating fire missed their farm.

Martha Adeline Westlund was born Oct. 5, 1915 in Duluth to August and Agusta Wickstrom. She lived in a farm house with her sister Eleanor, and ship captain father and mother. Her parents were Swedish immigrants, who mostly lived off the farm.

Martha grew up in Saginaw and graduated from Proctor High School in 1933. She married the love of her life, Joy Westlund, in 1937. They spent their lives at Grand Lake, where Joy preceded her in death in 2002.

Westlund lived through the Roaring Twenties, the Great Depression, the Dust Bowl, two world wars (and many more), the moon landing and two pandemics.

According to the obituary at http://www.atkinsnorthlandfuneralhome.com, the home she shared with Joy on Grand Lake was a source of happiness where friends and family would always gather. Without fail, they sat on the dock and watched the sunset together. During her last years she was able to remain in her home, with her youngest son, Tim, checking on her daily.

A celebration of life will be held at a later date. To sign the guest book and offer an online tribute, see http://www.atkinsnorthlandfuneralhome.com.