Plant a tree for free 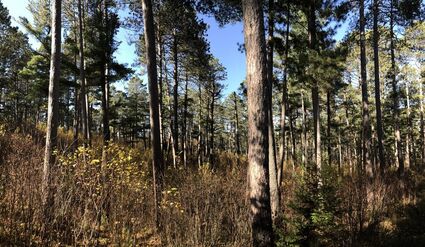 The best time to plant a tree was 20 years ago.

The second-best time is May 21. That's when the grand Pine Knot News "tree giveaway" is launching, a day when local businesses and organizations will be giving away a grand total of 10,000 pine seedlings to anyone who promises to give them a good home.

Sponsored by the Pine Knot News and Sappi, it's a way of giving back. It's a celebration of Sappi's multiple awards for being one of the most sustainable paper mills in the world, and of the Pine Knot News being declared Minnesota's most outstanding weekly newspaper. It's also a belated celebration of Arbor Day and Earth Day on a date that's more conducive to planting trees in the Northland.

Pine Knot advertising and marketing director Ivan Hohnstadt said the idea just kind of needled its way into his head about a month ago.

"When my parents bought their land near Park Rapids, my dad planted thousands of trees within the first year or two," Hohnstadt said. "He did several plantings. Now those trees that were so tiny when I was in first grade are 50 feet high."

Hohnstadt started making some calls and eventually found a tree nursery in Canada that actually grows trees for the Carlton County Land Department. He found a willing partner in Sappi (Dan Menor and Chris Martland, in particular) to cover the cost of the trees, and Upper Lakes Foods to transport them from another nursery in Wisconsin and keep them cold if needed.

During Tuesday's Cloquet City Council meeting, Mayor Roger Maki read a proclamation declaring Arbor Day in the city of Cloquet on April 30. It's been more than a decade since Cloquet was officially declared a "Tree City " but Maki supports trying to get to that point again over the next year. Part of being designated a Tree City USA is observing and proclaiming Arbor Day. It is, of course, the least challenging standard to meet.

Partners in paper and trees

A particularly punny person could call it a "treemendous" idea for a local newspaper and a local industry leader - both creating products made from wood - to partner in an effort to grow more trees.

At the same time, it also seemed possible that the citizens of a town also known as the "City of Wood" - and in a county which was once the White Pine Capital of the World - would jump at the chance to plant a few thousand trees, maybe one, two or three at a time.

The seedling options for the giveaway are "eclectic," Hohnstadt said, but good for Carlton County.

"It's kind of a happy accident that we ended up with the three varieties we did: Norway pine (aka red pine), black spruce and Jack pine," he said. "Some thrive in dry soil, others in wet. Some are super-hardy."

So far, more than 20 local businesses and Pine Knot News supporters are ready to give away trees on May 21. Hohnstadt expects that number to grow to include even local municipalities or schools, who might want to share the joy of trees with their residents, or designate a site for planting a whole grove of them.

Readers should keep an eye out for tree giveaway posters at local businesses, or look for the tree symbol in ads in this newspaper. If an advertisement has a tree in it, that means the advertiser will have seedlings available on May 21.

People will have seven days to plant their trees, which make the journey from Canada to Wisconsin completely frozen.

They will be thawed to 36 degrees before they make the trip to Carlton County.

The tree giveaway is also a way to draw customers to local businesses, some of whom were impacted by the pandemic and could use more local shoppers.

"Right now I'm giving them to advertisers that have supported us in the past, not asking them to spend any more money but thanking them for their past business," Hohnstadt said. "I hope they will continue to be regular advertisers. I'm also planning to reach out to local cities - they fall into the same category, placing legal ads with us - a way to say 'thank you' for choosing us, and it helps their local community as well."

The final reason for the great tree giveaway is the simplest. Like the folks at Magnolia Cafe like to say: "Do Good."

"I think this is also a way to get a lot of people working together to do good," he said. "I don't see a downside to this at all."

Global forests removed about one-third of fossil fuel emissions annually from 1990 to 2007.

Trees contribute to our health.

Trees provide us with oxygen.

One large tree can provide a day's supply of oxygen for up to four people.

More than 20 percent of the world's oxygen is produced in the Amazon rainforest.

Trees lower surface and air temperatures by providing shade. Shaded surfaces may be 20-45 degrees cooler than the peak temperatures of unshaded materials.

Evaporation of water from trees has a cooling influence.

Trees absorb carbon dioxide, removing and storing the carbon while releasing the oxygen back into the air. In one year, an acre of mature trees absorbs the amount of carbon dioxide produced by a car driven 26,000 miles. 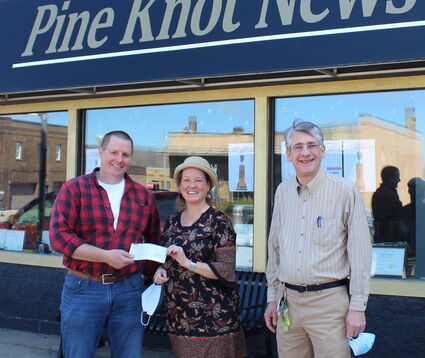 Sappi's Chris Martland (left) delivers a check to Pine Knot News editor Jana Peterson and advertising director Ivan Hohnstadt to cover the costs of purchasing 10,000 seedlings for a massive tree giveaway on May 21 being coordinated by the Pine Knot.

Trees help us save energy.

Trees properly placed around buildings can reduce air conditioning needs by 30 percent and can save 20-50 percent in energy used for heating.

Carefully positioned trees can reduce a household's energy consumption for heating and cooling by up to 25 percent. Computer models devised by the U.S. Department of Energy predict that the proper placement of just three trees can save an average household between $100 and $250 in energy costs annually.

Trees and forests provide important species range. Many animals have a range of hundreds of square miles. The mountain lion of North America, for instance, has a range of nearly 400 square miles.

~ Courtesy of the Arbor Day Foundation