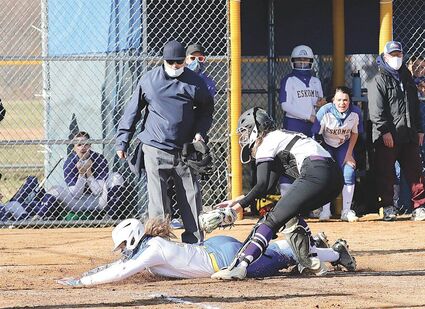 Like the weather this spring, the first softball game of the season for Cloquet and Esko was all over the place.

Initially, Esko took a 9-2 lead after two innings and looked to be cruising to an easy win. But the Lumberjacks had other ideas and rallied with four runs in the third, two in the fourth, three in the fifth and two more in the sixth inning, as they went from seven runs down to leading 13-10 after the Eskomos managed only one run in four innings.

"Our girls came out swinging and having patience at bats early in the game," said Esko coach Huff Emanuel. "Even building the 9-2 lead early, I knew that we would need to keep the foot on the gas because I knew that Cloquet could hit and score quickly, and they did."

The line score of the game resembled a football game more than a softball game. Both teams had hot bats throughout.

"Our entire lineup was clicking," said Cloquet coach Tyler Korby. "All 14 girls contributed in some way, shape or form. We scored 13 runs on 20 hits against a talented opponent."

The fact that his team was trailing 13-10 heading into the bottom of the seventh inning didn't faze Emanuel.

"I honestly thought we had a great chance to come back, because in the past we've always scored late in games," Emanuel said. "Miranda Kelley started off with a base-hit bunt and that seemed to spark us."

After Kelley's hit, Zoe Johnson flew out to right for the first half. That was followed by a walk by Maya Emanuel and base hits from Lily Hanson and Jayden Karppinen to cut the lead to 13-12. After a strikeout, the Eskomos were down to their final out of the game. Then Amber Carlblom walked and then Sydney Grayson hit a swinging bunt that ended up with an error - allowing two runners to score for the walk-off win.

"It was a game that whoever hit last would have that chance to win it," Emanuel said. "It probably would have been a different outcome if we played at Braun Park. It was just two very good-hitting teams in an epic battle."

Despite the loss, Cloquet coach Korby said it was an amazing game to play so early in the season.

"Honestly, that was one of the most fun softball games I've ever been a part of," Korby said. "Both teams were flying around, exchanging blows and trading the lead. Neither wanted to give in or back down. The fans and atmosphere were electric."

Sophie Diver and Brynn Martin had four hits apiece for Cloquet, while Roena Diver and Dana Jones added three hits each for the 'Jacks.

Cloquet turned around and played Duluth East on Thursday. They downed the Greyhounds 16-10 in their second road trip in as many days. 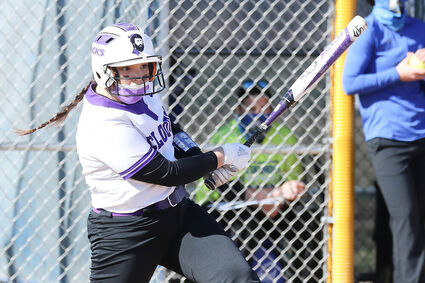 Cloquet's Justice Paro drives in a run with a hit in Thursday's softball game at Esko.

"The girls picked up where they left off the day before," Korby said." Hitting, hitting, hitting. I'll take a good-hitting team any day. Our offense is something fun to watch."

"Sorensen has thrown over 10 innings and 194 pitches in two days, and that for a kid who had never started a varsity game prior," Korby said. "She's done everything we've asked for, and then some. We couldn't be prouder of her efforts. Eighth-grader Allie Jones also pitched three innings against East, in her first time in the circle ever. I couldn't be happier for these two. They stepped up to the plate when we needed them most."