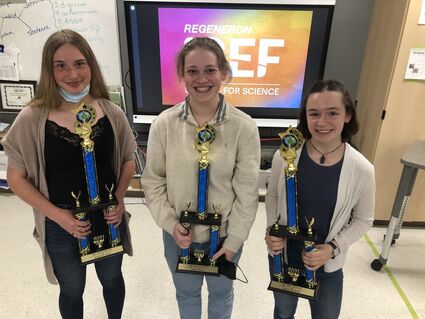 In just over two weeks, 600 finalists from around the world will gather for the Regeneron International Science and Engineer Fair to dazzle scientific experts with their projects and compete for nearly $5 million in awards, prizes and scholarships.

Four Northland students will be attending, three of them from Cloquet: junior Harmony Tracy and sophomores Emily Sapyta and Rowan Rock. Joining them is East High School sophomore Emelyn Beaster.

Only this year, it will be virtual. Sports competitions were not the only events disrupted by the pandemic. For more than a year, science fair students have not gotten to travel to faraway places such as Los Angeles or Pittsburgh to compete, the icing on the cake for the top student scientists.

Instead, they've stayed home and competed online, submitting videos, slideshows, charts and maps online, answering judges' questions in online forums and even working with their local mentors mostly over the internet.

Cloquet science fair director Cynthia Welsh said that is one of the biggest reasons she is so proud of this year's ISEF winners - a competition that her husband, Scott, likes to call "the Olympics of the Science Fair" during the annual awards ceremony.

"This is the second year of winning this big award and not getting to do it," Welsh said. "But they stuck with it."

While they don't get the airplane rides and hotel stays, all four students deserve the rock star treatment for some pretty remarkable science fair projects.

For her project, Sapyta examined the effect of different concentrations of tannic acid found in St. Louis River water and staphylococcus aureus (think staph infections) to bioremediate aquatic systems that have been contaminated by motor oil. "Since tannic acid is completely natural - it comes from tree bark, pine needles - it's green chemistry that I'm practicing," Sapyta said, adding that both things metabolize motor oil.

Tracy, in her first year of science fair, used ArcGIS mapping software to look at how the whole range of wild turkeys has changed due to climate change over the past 30 years or so. She mapped climate, snow depth and range. What she found was that the turkeys have been shifting farther north than ever before, and they've had to adapt to a totally different ecosystem than what they were used to in the oak forests farther south. "In northern Minnesota they will eat the seeds out of cow manure or eat out of the deer feeders on people's properties."

As for Beaster, she studied how to increase the mineral content of mustard greens to prevent mineral deficiencies, without the need for supplements. "When I was doing my research, I found out more how much mineral deficiencies can really affect you. And globally how large a percentage of the population is affected by it. So that made me interested in figuring out a way to combat deficiencies globally, and mustard greens are good at absorbing large amounts of minerals, and they're edible."

Rock was unable to make the interview earlier this month, but she wrote an English paper about her voyage through science fair since middle school - where she started a recycling program - and into high school. As a freshman last year, she decided she would like to figure out how mealworms biodegrade polystyrene plastic and then how to use that gut bacteria to help waste treatment plants get rid of microplastics in the water. 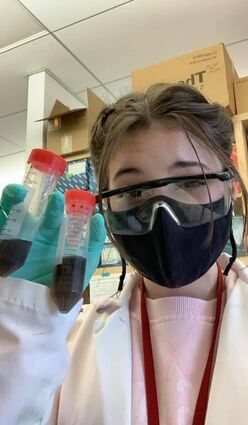 Rowan Rock shares a moment in the lab. The four will compete in the internatonal science and engineering fair virtually in May.

"Cut to the chase, my hard work paid off, and my project earned me major opportunities to attend and compete in California and New York at international fairs. I was ecstatic and could hardly wait to attend. ... However, my excitement was quickly deflated as Covid hit, and the trips were eventually canceled, along with everything else in life."

Rock considered quitting, but Welsh "didn't take no for an answer" and kept pushing. Rock responded and, earlier this year, was able to successfully isolate and identify a bacteria cultured from a mealworm which can break down microplastic particles. Scraping mealworm guts had paid off.

"I'm still working on my project today and hope to eventually introduce my bacteria into a water treatment plant to break down the microplastic pollution in the water," she wrote. "I'm so glad I never quit despite the many obstacles I faced along the way."