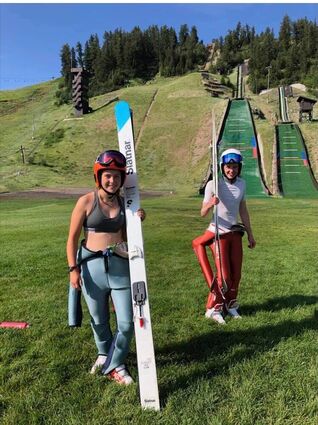 Cloquet siblings Charlotte and Aidan Ripp trained in Steamboat Springs, Colorado, last summer for ski jumping, which is half of the sport of Nordic combined. The pair were named to the USA Nordic national junior teams earlier this week again.

USA Nordic released the names of 45 American athletes nominated for its 2021-22 national and junior nordic combined and ski jumping teams Tuesday. Two of those names hail from the Cloquet Ski Club and the same house: Aidan Ripp, 20, and his sister, Charlotte Ripp, 16, were both named to the U.S. Nordic Combined junior teams for men and women according to an announcement posted on the website. Nordic combined is a sport that combines ski jumping with Nordic skiing competitions.

A sophomore at Cloquet High School, Charlotte is one of two athletes on the women's junior team. The other is Aspen Bennett-Manke, 15, of Steamboat Springs. Ripp and her teammate are at the forefront of women in Nordic combined, which is not yet an Olympic sport for women. As a world sport, it lags behind jumping, which allowed women to compete at the Olympics for the first time in 2014, when Charlotte was 9.

Twenty-year-old Aidan is one of seven on the men's junior team. He is the only Central Division member of the team. Aidan is currently attending college at Paul Smith's College in upstate New York State and training for Nordic combined at the nearby Lake Placid complex. His sister joined him there for a couple weeks this winter for training. Aidan also competed on the 2020 Junior World team in Germany shortly before the pandemic ended all international competitions.

"I'm excited to hopefully get some more opportunities to compete after this last year," Aidan said, referring to the many Covid-19 cancellations. "It has really driven me to keep my head down and really train."

Aidan and Charlotte (and eldest brother Nolan) are the children of Ken and Carolyn Ripp of Cloquet. The whole family has been involved in the Cloquet Ski Club for many years.

According to the USA Nordic announcement, athletes achieved the nominations based on selection criteria after the conclusion of the 2021 competition season.

"Our team nominations include a wide range of veterans across our national teams, but some great up-and-coming athletes on the junior teams," said USA Nordic sport director Jed Hinkley. "It was especially challenging this year with ever-changing schedule changes and cancellations."

Athletes will have the option of accepting nominations prior to the 2021-22 season. The final teams for the season will be named this fall.

With the Olympics coming up next winter in Beijing, athletes will be striving to earn positions on Team USA, according to USA Nordic. Those nominations and team naming will be announced just prior to the Olympics.

Want to know more about the Ripp kids? Read past stories online at http://www.pineknotnews.com.