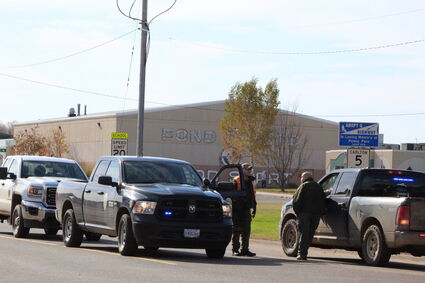 Fond du Lac police officers block off University Road after there was a shooting at a funeral in the Head Start building (behind) in October 2019. Pine Knot News file art

A man who shot his sister's boyfriend at a funeral on the Fond du Lac reservation in 2019 was sentenced to 110 months in prison Monday.

Shelby Gene Boswell, 29, was convicted in federal court with possession and discharge of a firearm (a .22 caliber rifle) by a convicted felon. His sentence of 110 months will be followed by three years of supervised release for illegally possessing and discharging a firearm in a school zone.

According to the criminal complaint, on Oct. 18, 2019, Boswell approached 45-year-old Broderick Boshay Robinson from behind before the funeral service started, then "pr...