Wilderness swept out of postseason 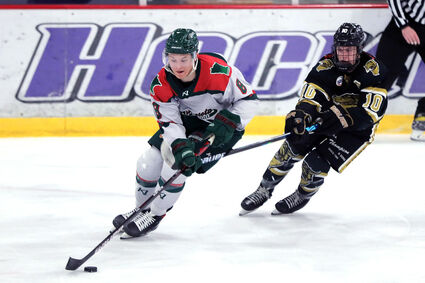 Josh Phillips moves the puck for the Minnesota Wilderness while being chased by Biskmarck's Austin Schwartz during Tuesday night's NAHL divisional playoff game. The season ended with a 5-4 loss.

After a long and uncertain 2020-2021 season, the Minnesota Wilderness saw their season and hopes of a second Robertson Cup championship end Tuesday night as the Wilderness fell in the Central Division opening round playoffs.

With the 5-4 win Tuesday at Northwoods Credit Union Arena, the Bismarck Bobcats swept the Wilderness three games to none and advanced to face either Aberdeen or Minot in the Central Division finals. After dropping two games to the Bobcats over the weekend in Bismarck, the Wilderness were hoping the home ice at NCU arena would benefit their players. The goal was to tie the series and play a fifth game back in Bismarck, but that wasn't in the cards Tuesday night. But nonetheless they put up a good fight,

The Wilderness got off to a fast start when Zach Michaelis scored at the 12:17 mark to give the Wilderness a 1-0 lead. The lead was short-lived, as the Bobcats would tie the game less than five minutes later. Both teams headed into the locker room at 1-1.

Bismarck made it 4-2 at the 5-minute mark of the third period when Nico Chmelevski beat Wilderness goalie Kaleb Johnson to put the Bobcats in front by two goals. 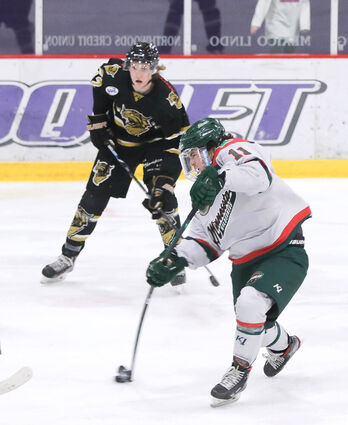 Ethan Wolthers shoots for the Wilderness during Tuesday's loss.

The Wilderness - who outshot the Bobcats 35-25 on the night - continued to pressure Bismarck and cut the margin to one goal when Mikol Sartor scored on the power play for Minnesota to, once again, make it a one-goal game.

Donte Larson cut the lead back to one goal with a goal at 11:54 of the third, but the Wilderness could not earn that game-tying goal as Cameron Korpi stopped 28 of the 32 shots he faced on the evening.

"We worked so hard this year. With everything we went through as a team and a league, we hoped for a different outcome," head coach John Vaillancourt said. "I am so proud of how hard they worked. We will say goodbye to many outstanding players, but we look forward to a new start next fall."