Honoring those who died ... and those who remember 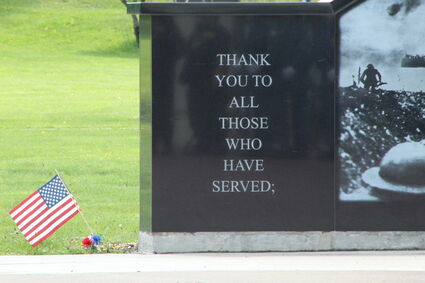 Honor guard members are reflected in the memorial at Veterans Park in Cloquet Monday during a Memorial Day service.

Accustomed to running the entire Veterans Services program on the Fond du Lac reservation, Vietnam War veteran Tommy Whitebird was overcome by emotion remembering the friends and fellow soldiers who fell in Vietnam, and those who died years later from the effects of the war: both emotional and physical.

But he was happy to see the more than 75 people gathered at Cloquet's Veterans Park Monday to pay their respects on Memorial Day. Others gathered at cemeteries and events across Carlton County, and spanning the country on the day set aside to remember those killed in military service.

"I don't know how to say thank you to all my comrades who aren't here anymore," Whitebird said in Cloquet. "There were 58,000 who passed away in Vietnam. That doesn't count the 100,000, or 200,000 who came back from there and suffered - a lot. ... I lost a lot of my friends. A lot of them from around here never died there. Terrible, they not only had to fight a war, they had to fight disease."

Whitebird said he was with 50 soldiers who boarded a bus outside the Tulip Shop in Cloquet and headed to Minneapolis and on to basic training. Out of those 50, there's only four left, he said.

When Whitebird got out of the Army in 1970, it was different.

"People wouldn't shake your hand or look at you," he said. "Now I can't go to Walmart or L&M where somebody doesn't come up and shake my hand." He shared a story about a little boy who approached him and tugged on his pants despite his dad telling him to leave Whitebird alone. The little boy said "thank you," then stood back and saluted.

"When we came back, I guarantee there weren't 100 people in the area that would [honor] us, all the people that were lost," Whitebird told the crowd. "I look around now and that's changed. I'm really happy to be a veteran from Cloquet, to see all you people."

It was a crowd of mostly older residents, with a few youngsters along with family members.

Before the service started, 9-year-old Maja Kuperus walked slowly around the plaza at Veterans Park, studying the bricks that bear the names of veterans. She comes for the Memorial Day celebration every year, she said.

Her father, Matt, is in the National Guard. He said it's important to bring his family there. "It's Memorial Day. They need to know about it."

Hawk Huard pointed out aunts who served in World War II, four (of five) with their names in the bricks, their brothers not far away. All of them survived the war, he said.

Patricia Johnson came dressed in her late father's jacket and wearing his dog tags. Arthur Johnson died in December at age 92. It was a hard year, but his daughter fiercely wanted to be there to honor his memory, she said. 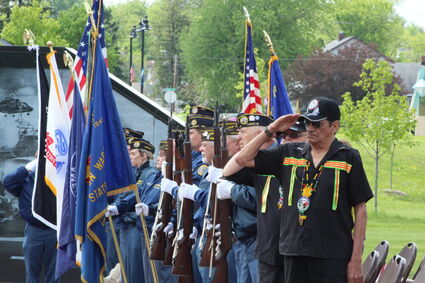 Members of the Cloquet Combined Honor Guard and the Fond du Lac Honor Guard give a rifle salute. Richard Yeasel is FDL member on the end. "I don't know how to say thank you to all my comrades who aren't here anymore," Vietnam veteran Tommy Whitebird said at the ceremony. "There were 58,000 who passed away in Vietnam. That doesn't count the 100,000, or 200,000 who came back from there and suffered - a lot. ... I lost a lot of my friends."

During the program, Mayor Roger Maki spoke about his father-in-law, Cassius "Cash" Koepke, and his service in Europe during World War II. Koepke was captured by the Germans but escaped with the help of a Russian soldier, he said. When the war ended he helped liberate Jewish prisoners from the Nordhausen concentration camp. German townspeople nearby claimed they didn't know what was happening at the camp so the soldiers brought them in to bury all the dead, he said. Roger's son visited the site and left angry and sad, with a better understanding of "what his grandfather fought to do."

"Thank you for being here, and to the veterans here, thank you for your service," Maki said.

Troy Smith talked the audience through the various elements of the program: the laying of the wreaths - one for each branch of service - and the raising of the flag from half-staff to full staff "in resolution to not let their sacrifice be in vain, but to rise up in their stead and carry on the will to fight for liberty."

Members of different veterans organizations read the names of those who died the past year. Many of them were the same - Tony Jurek and Duane Putnam among them - because they belonged to more than one veterans group.

Members of the Cloquet Combined Honor Guard and the Fond du Lac Honor Guard ended the ceremony with a rifle salute and taps played by Marine reservist Bryce Moe.