Kavanaugh wins it all on Jeopardy! 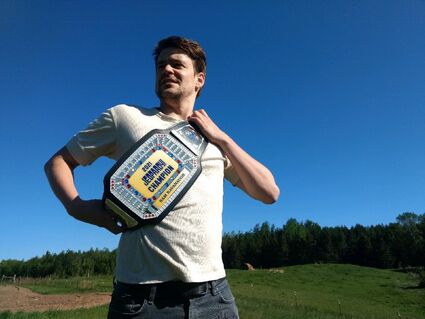 Carlton native Sam Kavanaugh cheekily posed with the championship belt shared by Jeopardy! "Tournament of Champions" winners while on Park Point in Duluth this past weekend.

The uproar at the Streetcar in Carlton late Friday afternoon was not sustained.

There were those who specifically came to watch Sam Kavanaugh in the last game of the Jeopardy! Tournament of Champions final, like the family friends in the back room.

There were those who were reminded by the venerable game show airing on all of the multiple televisions that a local kid was doing pretty good, again, on the quiz show.

Some chanced into it and caught on, at the bar for food and drink in an early kickoff to the Memorial Day weekend.

Kavanaugh won it all, and, just before 5 p.m., the bar erupted in cheers and applause. Then it was just as quickly silent as the screens flashed "Champion" below Kavanaugh's name while he broke a usually cool demeanor and with emotion in his face and in his gestures.

It was quite a moment.

At the bar owned by Kavanaugh's aunt and uncle, there were open mouths. Hands stopped mid-clap. The wash coming over Sam was spilling onto his hometown fans.

Thoughts were likely flashing like the category titles that open each Jeopardy! game.

There's Sam the teenager, watching the show and dreaming alongside his late mother, Jane.

The son of two teachers, there he is in his childhood home, maps pinned to the hallway walls and always the encouragement to be curious in the world.

There's the Knowledge Bowl student who graduated from Carlton High School in 2009 after multiple state appearances, drawing at least one former competitor to note online last week, like a badge of honor, that he once played against Kavanaugh.

There's Sam graduating from Carleton College in 2013 with a teaching degree, with a focus on social studies, like his father, Ed.

There he is in his online and bar trivia league, in Minneapolis, where the substitute teacher practiced for his original stint on the show in 2019 and then for his championship run in games recorded in March.

There he is in front of middle- and high school students, paying forward his appreciation for those who taught him.

All that community meant little for two months as Sam had to remain silent about how he did on the show. All he had were the other tournament contestants who also knew the end result. "Without communication with the other players, I would have doubted it actually happened," he said this week.

A few miles away from the Streetcar, at the family farm, Sam was soaking in the airings of the two-part final on Thursday and Friday with his family. Because not everyone has been vaccinated against Covid-19, the Kavanaughs didn't go to the Streetcar.

"It was pretty cool," Sam said, back to his button-down style, about viewing the show from his childhood home. One of his Twitter posts during his stay included a picture of him holding one of the newborn kittens on the farm.

"It was magical," father Ed said of the entire weekend of family and basking in his son's win. "A treasure."

Sam wearing that emotion on his face after the final isn't a common thing. He's a private guy. When asked about perhaps becoming a guest host on the show, a much-coveted role since longtime and beloved Jeopardy! host Alex Trebek died last fall, Sam demurred. "I don't think I have the personality type for that." He left the door open. "I wouldn't say no."

In an interview done by the show after winning the tournament, he talked about all the people to thank, all the emotions reeling. The "weird world" he now inhabits as a Jeopardy! champion.

"This was such a distant, faint thing when I first tried out for Jeopardy! And it slowly grew in my mind." He won five games in 2019 and earned enough to garner an invitation to the 15-player tournament. It was a big deal, since he rose above about 500 players from two years of shows, since there was no tournament in 2020. It was also the first without Trebek, who, during his 2019 run, Sam called the "most trusted man in America."

Because he knew he couldn't tell the world about this life-changing event for two months, Sam wrote down his feelings. He said it was strange to tape shows with no audience, with players remaining 6 feet apart due to lingering pandemic measures. But the game show staff and the players who didn't make it to the final round were there. They gave Sam and his two opponents a standing ovation. Guest host and former tournament champion Buzzy Cohen brought it all to a point, Sam said. "He said 'Welcome to the club. Drink it in.'"

It was Cohen who started a tradition after he won the tournament in 2017. It is the championship belt styled after what professional wrestlers parade around the ring. Sam recently received the belt from the past champion, along with the winning check from Jeopardy!

He went to Park Point in Duluth to cheekily pose with the belt along the shore of Lake Superior. He posted the pictures to his Twitter feed. "It's not like the Stanley Cup, you can't drink out of it," he said with a laugh.

He's loving the attention the win has brought, especially from the community of Jeopardy! players. It's all "cool to see," he said. And while he does still feel out of place in joining the esteemed league of champions, he did enjoy learning that his $250,000 payday for winning the tournament places him in the Top 20 for prize earnings on the show. 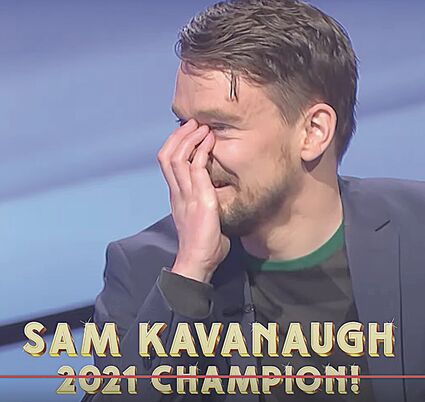 This still from the recording of the final Jeopardy! Tournament of Champions game shows an emotional Sam Kavanaugh as he won the whole thing.

He'll be careful with the money, Ed said, recalling that his son learned early on the value of a dollar and what to do with it. "He made money selling eggs as a kid," he said. "He'll be frugal."

For now, Sam plans only to upgrade his outdoor adventure gear. There might be some travel once the worldwide pandemic subsides for good. He said he will put some money into the science camp he's hosting again in Carlton this summer. Investment in education is how he got to the national stage, he said. "I'm an educator, and I know there would be no opportunity without that community."

Ed said this week that Carlton is a small town and everyone knows about Sam by now. If they don't, they might pick up on it as he wears the Jeopardy! baseball cap he found in Sam's room in time for the 2019 shows.

There's a reason there was that shared, silent emotion after the cheers in the Streetcar Friday.

"Everyone in Carlton has a Sam Kavanaugh story," Ed said. "Everyone is part of his education."