Recent grad opts for a trade, gets to work 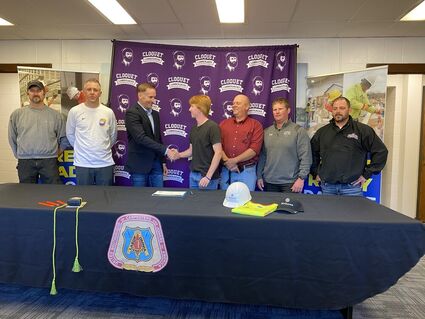 Cloquet graduate Hunter Finnela shakes hands with Brian Durand of McGough Construction, while his shop teacher, Dusty Rhoades, stands behind Finnela and watches with delight during sign-on day Friday at the high school. At the far left is another shop teacher Bret Gunderson, next to principal Steve Battaglia. At far right is carpenters union representative Adam Johnson, with vice principal Tim Prosen next to him.

Starting next week, recent Cloquet High School graduate Hunter Finnila will start work in Duluth, one of hundreds of construction workers building the new Essentia Health hospital and clinic, a massive $900 million project in downtown Duluth that is already reaching toward the sky next to Lake Superior.

On the morning of graduation last Friday, Finnila took that giant step into his future, signing on with McGough Construction and joining the carpenters union, where he will be part of their four-year apprenticeship program.

Finnila said the choice made more sense to him than college. He enjoys working with his hands. He has taken every shop class he could ever since middle school.

"I didn't really want an office job, I wanted to do something in the trades," he said. "It was getting toward the end of the year so I talked to [industrial technology teacher Dusty] Rhoades and he got me in touch with the union rep. From there it flew by and the next thing I knew, I was signing."

Although Finnela was the only student this year to sign on for the apprenticeship program, he wasn't the first. In 2019, Harlan Foster, Declan Goward and Drake Nordin signed with different contractors.

That was the year Cloquet High School vocational teachers Rhoades and Bret Gunderson led the way in transforming an already well-developed industrial arts program into a comprehensive building trades curriculum that can provide students a direct path to employment in highly skilled construction trades.

"We partnered up with the Carpenters (Local 361) and Millwrights (Local 1348) unions, got their curriculum, and incorporated that into our program here," Rhoades told the Pine Knot News in a 2019 interview. "It's a three-year deal. We have Construction 1, 2, and 3, and kids can take whatever level they want as many times as they need to.

"Prior to the curriculum and agreement with the trade union, they would have had to go out and knock on doors and get hired before they would get into the union," Rhoades said.

Once Finnila completes his apprenticeship program - which includes on-the-job training and five weeks of training a year at the union hall - he can become a journeyman (licensed professional) in his trade. He'll have no student loan debt, to boot.

Finnila said he will start work at around $20 an hour, plus benefits. "I think the total package ends up being around $43 an hour," he said. "And they'll pay me a stipend when I'm training at the union hall. You can't beat that."

Finnila recommends current students take advantage of the many different shop classes to find out what they like, and reach out to people in those careers if they are considering a future in the trades. "If you think it's right for you, go for it," he said.

Rhoades was excited to share the news of Finnila's commitment.

"Hunter will be this year's first student to sign on and join," Rhoades said. "More importantly, Hunter will be going to work as an apprentice, to learn a trade that can become a lifelong career."