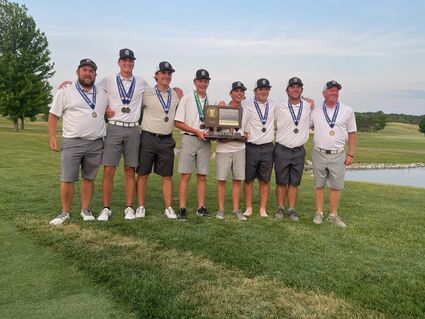 The Cloquet golf team is taking the state tournament championship trophy north this week after winning it all at the state meet in Jordan. Sam Baker won the individual title as well.

In what will go down in state golf history as one of the most memorable, dramatic individual finishes in high school play, Sam Baker won the Class AA State Boys Golf Championship Wednesday. Add to all of that, the Cloquet boys team won it all as well.

Baker beat Beck Erholtz of Staples-Motley by one stroke. They traded the lead back and forth over the last few holes before Baker birdied two of the last three holes to emerge on top at the Ridges at Sand Creek golf course in Jordan.

Baker's group was the last to come in, so his teammates were waiting for him. They already knew they had the team championship locked up, so they were just waiting to see if he could pull out the individual win.

"I don't have a whole lot of words for it. Exciting, proud, all of the above," Baker said after it was all over. "Once I finished we celebrated as a team. There were lots of hugs and then after the awards ceremony we all jumped in a disgusting pond, with our white shirts on - it's a tradition for the state champions."

The team title was impressive. After posting a combined score of 300 on Tuesday, the Lumberjacks posted an even more spectacular total of 298 on Wednesday to win by 18 strokes.

Eighth-grader Karson Young had two very solid rounds, including a one-over-par 73 on day two. His combined scores were good enough for a fifth place overall finish. After eight holes on the second round, Young was one under par under pressure conditions. Sophomore Karson Patton came back with a solid 74 on Day 2. Patton's round started with an eagle three on the par five first hole.

Patton's eagle may have jump-started the entire team.

Jacob Walsh birdied both holes No. 1 and 10 in shooting an 82. He finished 25th overall of the total 88 competitors. Braydon Tyman recovered nicely from his first round by shooting 78 on Day 2. To cement his round in the seventies, he birdied hole No. 17. Trevor Steinert shot an 80 the first day and 85 on Wednesday. All players contributed in the cumulative two-day team score total. Totino Grace was the runner-up. 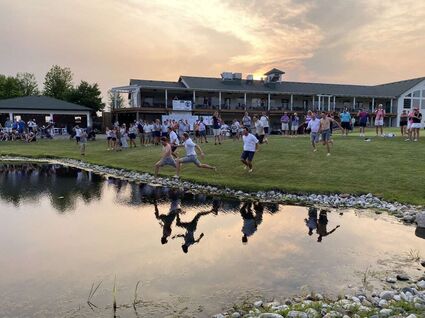 The team dove into what Baker called a "disgusting" pond on the 18th hole after the award ceremony. It's tradition for the state champs.

Baker had a blistering 68 after the first round Tuesday and followed up with a 73. It was a fitting end to a great season for the senior, who spent part of his distance learning time in Arizona, where he could play golf in the winter months while doing classes online.

Look for a detailed story on the Lumberjacks' double golf championship in next week's Pine Knot News.