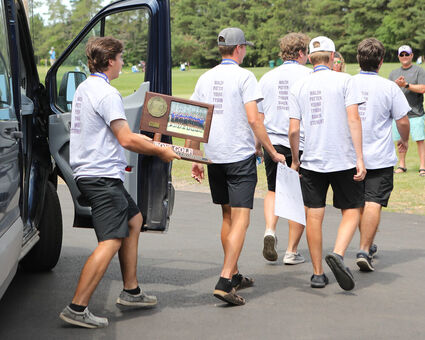 Members of the Cloquet boys golf team are welcomed home at the Cloquet Country Club June 17 after winning the state title the day before.

As the school van came to a halt and the doors opened, a crowd erupted into cheers at the sight of the Cloquet golfers and coaches emerging from the van, carrying the coveted state championship trophy.

It was truly a championship to be shared by all.

Sam Baker, the medalist on Day 1 of the tourney with a sparkling 68, hung on to win by one stroke for the individual state title. Karson Young, an eighth-grader and coach Young's nephew, might have been the surprise of the tourney, shooting rounds of 76 and 73 to finish fifth overall.

It was the third trip to state for the seniors on the team - making true the proverbial "the third time's a charm" - and an unbelievable experience as a team, Steinert said.

"The boys had a little bit of a struggle on the first day out of the gates, but we battled and we know that we had six guys who could go out there and pull scores. So that was the biggest thing. We didn't have to rely on just three or four kids," Steinert said, referring to some slightly higher scores than usual on

Day 1 for some of the team.

"The biggest thing is that our sixth man came in and stole the show," he added, referring to Karson Young. "Honestly, he was the MVP of our team; he was the pacer for us. He paces the boys in on the first day with the 76. And that told us 'OK, we have this. We can go out there on the second day, we can do the same thing.' And finishing the season undefeated at 13, that's something that I will never forget and something that these boys will never forget either."

Tyman agreed, in fewer words. "It was fun to be around the guys and the good competition," he said. "I knew if we just continued to play our game, we'd have a good chance to win. We have six guys who contributed at every meet and that's what it takes to win."

The team title was impressive and never in question. After posting a combined score of 300 on Tuesday, the Lumberjacks posted an even more spectacular total of 298 on Wednesday to win by 18 strokes over Totino-Grace.

Junior Jacob Walsh said they went out for dinner after the first day, when the team was up by five points, and decided they had to do better.

"We're like, yeah, we're in the lead. But that doesn't really matter. The first day is over," he said. "We need to come back tomorrow and do the same thing for us to win, and we actually did better."

Sophomore Karson Patten exemplified that second-day push, after struggling on Day 1. Patten's round started with an eagle three on the par five first hole that may have jumpstarted the entire team. He shot a solid 74 on Day 2, good enough to tie for 14th at State.

"That gave me a couple strokes to work with at least, so that really moved me forward in the round," Patten said. He tries not to check the leaderboard, he added, to help keep his head in the game.

"You can have all the talent, but not know how to handle adversity and crumble at the first sign of trouble in a round," Young said. "Top golfers are able to rebound from a bad shot or bad hole by focusing on the good shots they have had and working within the positives of their game. Sam has mastered this and it was great to see eighth-grader Karson Young do this well on Day 2 of the state tournament. He was playing fine, then had a double bogey. He could have started to fold under the pressure, but instead he refocused and went birdie, birdie on the next two holes to get the shots back and stay on track."

Baker shared a play-by-play recollection of the tournament's storybook finish, the one that had his mother's heart racing. He and Beck Erholtz, a senior from Staples-Motley, were locked in an incredible head-to-head battle but couldn't physically see each other. Baker was finishing his round on the back nine and Erholtz was completing his 18 on the front nine.

There are many hills on this tournament course which occasionally limits internet connections and subsequent access to leaderboards, which the golfers (and fans) usually track on their cellphones. Baker thought he was one stroke ahead after he birdied hole No. 16. He then found out that Erholtz had eagled hole No. 7 and he actually was one stroke behind. It was Erholtz's second eagle of the day. Earlier, he had an incredible hole-in-one.

After some consultation with his coach and teammates, Baker's best guess was that he and Erholtz were tied going into their last holes. Coach Young told Baker that Cloquet had the team championship locked up, so "go for it." Baker's last hole, the 18th at Ridges, is a 516-yard, par 5 with Sand Creek running adjacent to and then crossing the fairway at about the 300-yard mark. Baker told me he pulled out his 2 iron for his tee shot because he didn't want to drive it too far into the creek. He said the adrenaline was flowing and the ground was hard and he hit it about 275 yards. From there, it was uphill to the green and he had about the same distance remaining as his first shot had traveled, so he pulled his trusty 2 iron again from his Lumberjack purple and white bag. He ripped it and put the ball on the green about 40 feet from the flag stick.

From there, Baker said, "All I had to do was two-putt for the state championship." This can be a difficult golfing challenge, with no pressure. But Baker had similar putts on that green in other state tournaments in previous years. He put his first putt about "gimme" distance from the cup and then calmly went up and tapped in for birdie.

Erholtz did not go down lightly, as he had a birdie putt of his own on No. 9, but his effort ended up about one inch away. Baker had won the individual state title.

Karson said he didn't expect to take fifth place, but he thought something special was going to happen at state. He is the youngest player on the varsity team and the most recent to make the roster full-time. He's been playing golf since he was three or four years old; he is also a fierce competitor in hockey and football. The eighth-grader said he tapped into those experiences

"I try to tune out all the crowd and the noise and forget about it, just think about teeing off on No. 1 with all my friends, just having a fun round of golf," he said. Being coached by his uncle made it even better. "If he can continue doing that through high school, it'll be pretty special."

Kenny Young was sitting in a cart waiting for the arrival of the Cloquet boys golf team last Thursday at the Cloquet Country Club. Kenny is the father of coaches Aaron and Kyle Young and grandfather to players Karson Young and Trevor Steinert. He was at the state meet and witnessed a great golfing moment by grandson Karson, in between running water to all the players.

He recounted, "I happened to see Karson approaching the nearby green. The greens had big undulations and I saw him lining up his putt from the opposite side of the green from where the pin was located. It must have been a 30- or 40-footer. When he hit the putt, it went up and down ... seemed forever, like I could have had time for a sandwich. Then, miraculously, it disappeared into the bottom of the cup."

Coach Young said the seniors will be dearly missed, but he's excited to see how the team develops next year. "We have experience coming back and everyone on our JV played at least four varsity meets, so they have a good idea of what next year will be like."

Cloquet High School principal Steve Battaglia and vice principal Tim Prosen were at the country club to greet the returning champions as well.

Neither man could recall the last time Cloquet won a state championship as a team. Teams have placed second fairly recently (girls hockey in 2020, football in 2017) and third (softball in 2019) but they guessed it's been decades since there was a team championship. A combined Cloquet-Esko cross country team won in 1984 and again in 1985, when current track and Nordic ski coach Arne Maijala was an Esko student, he said, adding that Cloquet's John Wodney was the overall individual winner in 1984. To find just a Cloquet team (versus combined), one might have to look back even further, to the 1970s and 1960s, when Cloquet skiers won seven individual jumping titles and 12 team titles (competing as combined jumping, Nordic and alpine ski teams) in 14 years.

Although the golf team graduated three seniors, it returns Patten, Young and Walsh next year, along with a very strong junior varsity team. All three of the returning varsity players are motivated, and they say they have strong golfers to complete the varsity team.

"Hopefully we can make a run again," Karson Young said.

In the meantime, coach Young was back at the Cloquet Country Club this week as the junior summer program was kicking off, with about 55 kids. Ever busy, he said he was grateful.

"Thanks for all the support from the Cloquet Country Club, Cloquet High School, and community," he said. "It has been a fun year for the team and we feel very lucky and blessed to finish this year unbeaten and with a state title."