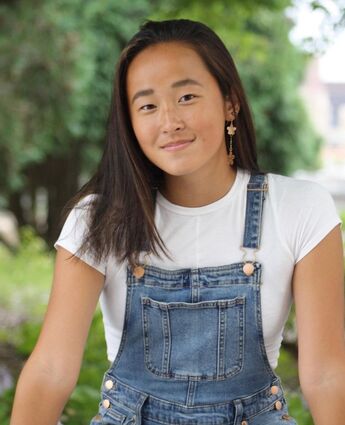 Ilei Benson recently injured four of the six ligaments in one of her knees, sidelining her from sports for at least six months.

Ilei Benson was sprinting down a soccer field this spring, headed toward the goal. Then she felt a painful pop. Her knee hyperextended. It buckled beneath her.

"Then I'm on the ground," Benson said.

Within the knee are six ligaments. In falling during a summer league soccer game against Maple Grove, Benson injured four of them. The injury brought an exceptional track season to a screeching halt for Benson, who had broken the Cloquet High School pole vault record of 9 feet, 7 inches with a vault of 9-8 and again with a vault of 10 feet. The CHS junior was forced to miss her last two track meets of the season, including sections. On top of that, she won't be able to play her senior year with the girls soccer team.

Although doctors concurred about her injuries, Benson got two very different recovery plans from two hospitals.

Doctors at Essentia Health in Duluth advised Benson to stay immobile during the weeks leading up to a surgery and estimated an eight- to 12-month recovery period. They anticipated a few surgeries to fix the damage.

But when Benson went to the Mayo Clinic on June 14, doctors estimated a recovery inside of six months. Moving, stretching and walking was highly encouraged, and doctors were not as strict about movement before the procedure, which was set for Thursday, after the Pine Knot News went to press.

"It was nice hearing that my recovery was going to be half of what I thought it was," Benson said.

But, she still missed the last two meets of her junior track season. "If this hadn't happened, I know I had [10-6] in me," she said.

After her injury, Benson spent her new free time trying to create joy and provide guidance to the people around her. Dubbed "Coach Ilei" during the season, she had already spent this year helping out new vaulters. That continued.

"In so many ways she has replaced her athletic ability and accomplishments with leadership," said head track coach Tim Prosen. "She's still here every day, and she's still smiling and making a positive impact."

Benson plans to compete in the 2022 track season, and clear 11 feet. She also hopes to make it to the state championship.

But she can't heal fast enough for soccer. As a standout forward, she will be missed on the field by her teammates and coaches. She will spend the season as a manager, keeping statistics and shagging balls while recovering.

"I will continue to help out whenever I can," she said.