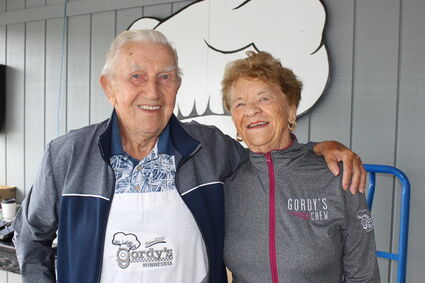 Gordy and Marilyn Lundquist, seen here during filming for a 'Diners, Drive-Ins and Dives" episode in July 2020, started Gordy's Hi-Hat in 1960. The restaurant is well known across the state, and is popular with locals and visitors alike.

A Northland legend has died. Gordy Lundquist, who founded Gordy's Hi-Hat restaurant with his wife, Marilyn, passed away Tuesday at the age of 93. He was home with Marilyn by his side.

The two of them founded the famous restaurant - featured many times on cable television food shows and a favorite of residents and visitors alike - along Highway 33 in Cloquet in 1960. Until the pandemic, the two of them still worked at the restaurant frequently: Gordy taking orders up front with his son, Dan, and grandson, Sever, while Marilyn worked in the kitchen, often visible behind the stainless steel counter as the orders rolled in. At 91, he still worked multiple days a week.

When the restaurant changed to its carhop-style service in response to the pandemic, Gordy opted to stay home, as he wasn't as nimble as he once was. Marilyn officially retired from her days of cutting up and frying onion rings.

But even when he wasn't behind the counter, Gordy was still very much a presence. His name is everywhere, a lifesized cardboard cutout greeted customers in the lobby, family photos grace the paper placemats ringed by red checkers.

His death was announced on the business Facebook page Wednesday morning, and responses poured in.

Comments ranged from heartfelt condolences with many people writing about Gordy's legacy in Cloquet, his wonderful smile and how hard he worked. Others called him a role model and an "icon" for Cloquet. Generations of families shared their memories of visiting the well-known restaurant.

"It was always a thrill and honor to be waited on by Gordy! I felt like I was in the presence of someone very special, and I was. So very sorry for your loss," wrote Jeanne Radzak Eng.

Gretchen Maslowski said her son onced asked Gordy for an autograph. "We have it on an order ticket and will cherish it always," she wrote.

Past employees weighed in too.

"Gordy was a wonderful man, and I truly enjoyed working for him. He taught me a lot to ensure customers were a priority in always receiving the best quality food and service. He will be greatly missed by many," Becky Halvorson wrote.

"I worked for Gordy for many years, both he and Marilyn treated me like I was family not an employee. He was one of the kindest, generous and happiest [people] I have had the honor to know and work for. Peace to Marilyn and the rest of the Lundquist family," wrote Heidi Spies.

Jena Rust remembered going to Gordy's after a softball game in Cloquet in high school. She was wearing her Denfeld jersey and he asked if they won. "I said we did and he said, 'that-a-girl! Congrats!' His son slid over on the counter and whispered loudly, 'Dad, that means she beat your granddaughter!' Gordy winked at me and smiled and said, 'That's okay, Denfeld is better!'"

Lundquist was a Denfeld graduate.

After living in a house next door to Gordy's Hi-Hat - now the grounds of Gordy's Warming House - the Lundquists moved back to Duluth, taking up residence in Marilyn's childhood home in Lincoln Park. They wintered in Florida when the Hi-Hat was closed for the season.

Gordy's was actually the couple's second drive-in. They first opened and later sold a carhop restaurant along London Road in Duluth.

Gordy is survived by his wife, Marilyn, two sons, Dan and Rick, seven grandchildren and at least one great-grandchild.

Family members were unavailable for comment when this week's issue of the Pine Knot News went to press.