The king outduels the kid 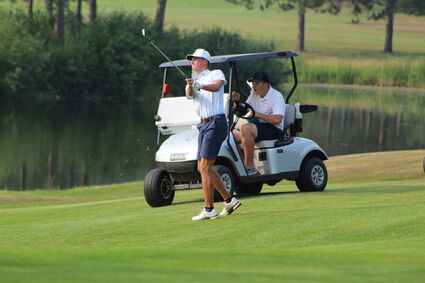 A total of 175 golfers participated.

An army of golf carts - which grew larger as the days wore on - filled with friends and family followed the final group on Sunday, cheering on their favorites. Dwight Cadwell and Cade Pearson from WKLK 96.5 radio provided live coverage all day Sunday from a golf cart.

Entering the final 18-hole round on Sunday, Sundbom was 4-under and had a one-stroke lead over Baker and two shots over Sheff. It was the first Invitational for Baker, who recently won the Minnesota State High School League AA state individual and golf team championships. It was Sheff's 37th tournament and another where he finished just short of the hardware.

Sundbom is no stranger to the Cloquet Country Club. His grandfather, Rick Nelson, is a 60-year Cloquet club member and follows Taylor on many of his golfing rounds. Nelson was there again Sunday.

"Taylor and his brother played with us in the parent-child tournament growing up and always enjoys playing here," Nelson said. Taylor's brother, Trent, won the Cloquet Invitational right out of high school in 2014. Taylor won it the next year, in 2015, and every odd-numbered year since then.

Baker's grandfathers were also there Sunday. Jim Crowley walked the course. Bob Baker rode with Sam's dad, Bruce. Peering through the trees while Sam teed off at the seventh hole, Crowley figured it was a good drive. "He twirled his club, that's usually a good sign," he said.

Crowley said Sheff was impressive. "He's keeping up with these young lions," he said of the veteran golfer with his trademark cigar, who has finished as runner-up in the invitational 14 times over the years.

Sundbom said the Cloquet Invitational centers around stroke play (each stroke counts) versus match play against a particular opponent with scoring per hole won. Stroke play can lead to big swings in the scores, but it's a good test, he said.

"With stroke play, yes, we were playing each other, but more than that, you're playing the course," Sundbom said. "I feel like my game is more suited for stroke play."

He also loves the atmosphere at the Cloquet Invitational. "It's centered around having lots of fun," Sundbom said. "And it's fun having everyone around and reacting to different shots."

Like Baker, Sundbom is also a former state high school golf champion, winning for Hermantown in 2012. He recently just missed qualifying for the U.S. Amateur Championship in Pennsylvania. Baker was leaving for North Carolina to play in the U.S. Junior Amateur Championship.

Sundbom said he has played before with Sheff and Moores, and was excited to play with Baker, as he's followed his high school career over the past two years.

"I like seeing good younger players come out, it means there will be better golf in (the area)," Sundbom said. "And it wasn't too long ago I was pretty much in his shoes."

Although the competition was close, it sometimes felt like a battle between Sundbom and Baker, who toggled back and forth for the lead on the first nine Sunday.

After starting out one shot up, Sundbom pulled a drive into the trees on the left and ended up bogeying the second hole while Baker parred the difficult hole. They were tied.

The last day of the invitational usually has some particularly challenging pin placements. Hole No. 4 fell into that category. The "gully" hole - the crevasse carved by an ancient glacier - is a rather short par 3 at 143 yards. The green is surrounded by sand traps and has an incline. The pin was on the extreme left edge sloping towards the St. Louis River. Sundbom was short-sided in the left bunker. Baker hit a marvelous tee shot and birdied the hole. Sundbom bogied, so it was a two-shot swing and put Baker in the lead. Baker also birdied five.

At one point, he was three shots ahead of Sundbom, but soon it would be Baker's turn to make some mistakes.

Further ahead, on hole No. 8, the 414-yard par-4 dogleg left, Sundbom hit a terrific shot to the green, nearly holing it, and had a tap-in to birdie with three. Meanwhile, Baker had tree troubles on the right - hitting his ball into the same tree twice in a row after it rebounded hard the first time - and ended with a double bogie. It was a three-shot swing and catapulted Sundbom back into the lead.

After his birdies on 8 and 9, Sundbom said he was able to settle in and relax more.

Sundbom three-putted the par-5 16th hole for a par.

Baker bogied 15 but birdied 16. Coming into No. 17, Sundbom had a two-stroke lead that he never again relinquished. Sundbom and Baker finished under par on the difficult Cloquet layout. Sheff and Brian Moores finished even par.

In an interview two days later - returning from Day 1 of a tournament in Chaska - Baker wasn't exactly thrilled with his finish.

"It never sits right to get second," said the recent Cloquet grad. "But he played well and there's not much to do when he plays well."

He had fun, though. "I knew the guys I was playing with, they're all great guys, it was fun," he said. "And the crowd coming in, that's awesome, with all the carts."

Although winning would have been ideal, Baker was excited to play in the invitational at his home course. Tournament organizers had raised the minimum age to 21 this spring, but they allowed three seniors - Baker, Trevor Steinert and Brayden Tyman - from the state championship Cloquet team special permission to play. "It's a tournament we've been looking forward to for so long," said Baker, who had teammate Jacob Walsh caddy for him this weekend. 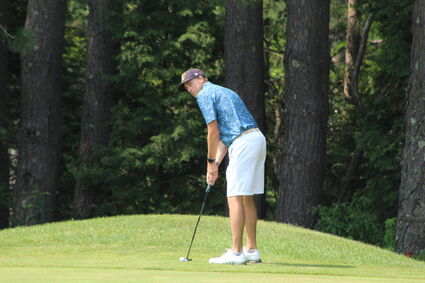 Cloquet pro Bill Manahan called the tournament "amazing but draining" for all the country club workers.

"Between the greens and pro shop crews, the bartenders and waitresses, the cooks and servers, the cart and golf club cleaners, the volunteers supplying flowers and other beautification, it's a lot of people helping to make it a great experience for all the players and their family and friends," Manahan said. "There are some long days and there is a lot of behind-the-scenes work as well. Thanks to all involved. From all the positive feedback, I think we pulled off a very successful event. We're already looking forward to the 2022 tournament."