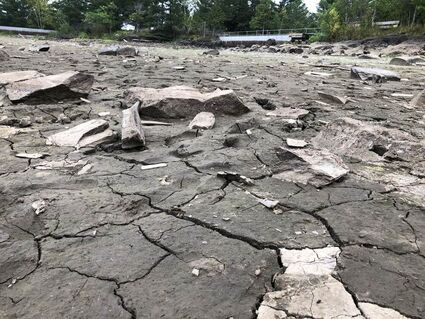 The water levels are so low at the reservoir in Thomson that the lake bottom is now an extended beach, and rafters and others using the river have more walking to do to get to their usual landing spots. How low is it? In the photo below, the dock normally used by boaters ends far from the water's edge, hovering 5 feet above the dry mud below. "Usually that dock ends above the water," said Swiftwater owner Cliff Langley.

This summer’s drought is painted in the yellow of parched grass and fields, and the cracked brown and grey mud of a riverbed far more exposed than usual.

The St. Louis River is still running, but it’s the lowest Minnesota Power’s Chris Rousseau has seen since around 2005. “Right now we’re about 7 feet below what we consider a normal-high pond,” Rousseau said of the Thomson Reservoir, where the water has receded substantially, leaving beaches of drying mud and docks that serve no boats.

Only one gate is open on the Thomson Dam. It’s quieter there, and more rocks than usual are...