Gayle Grant's secrets to a long and happy golfing life 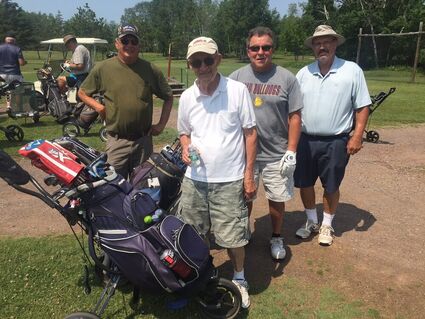 It was a beautiful warm July summer day at the Rugged Spruce Golf Club in Mahtowa. About 25 golfers had played in the Friday morning golf scramble. After nine holes, most linksmen were grabbing for their water bottles and refueling, as recommended by experts, for the final nine holes. One golfer stood out from the crowd. He looked like he hadn't even broken a sweat.

His name is Gayle Grant, he's 88 years old, and he walks 18 holes pushing his cart at the Rugged Spruce every Friday. I had to know his secret and, indeed, what was in his water.

Gayle Grant was born in Indiana during the Great Depression in 1933. He suffered from rickets as a small child, a vitamin D deficiency that can cause poor growth development of bones. "I was always a runt, yet my brother was an athlete and had scholarship opportunities to prestigious universities," Grant said. His family moved to California and eventually Las Vegas when he was a kid. His dad was in the military aircraft business. Grant spent summers working in South Dakota, and graduated from high school in Las Vegas.

After watching the John Wayne movie, "The Sands of Iwo Jima," Grant and his friend decided to enlist in the Marines. They both had to wait until they were 18, since neither of their mothers would give them permission while they were 17. He eventually served six months in Korea until the conclusion of the conflict, and wrapped up his Marine military career as a sergeant guarding a Naval torpedo base in Washington state.

Grant spent most of working life as a supervisor at a grocery store chain in Las Vegas, where he met his wife. She was born in Duluth and moved to Vegas, and worked in produce at the same store. His bride was in charge of plants, having formerly worked at a nursery. They've been married 40 years now, not quite catching Jimmy and Rosalyn Carter's 75 years. They raised kids as well, one of whom - Gayle can't believe - is now collecting Medicare.

Grant eventually retired from the grocery business, moved to Minnesota, and bought a hobby farm near the golf club in Mahtowa. He, his wife and sister-in-law often volunteered at North Country Ride and even boarded the group's retired horses at their farm. The Grants have since moved to Wrenshall.

Weather permitting, our 88-year-old hero golfs three days a week: Mondays and Wednesdays at the Pine Hill Golf Club, and Fridays at Rugged Spruce. "I try to always walk unless playing on a bigger course other than the local tracks," he said. Grant started golfing in his 20s, once taking about a 10-year hiatus from the game. Since moving to Minnesota about 30 years ago, he has been a golf regular/addict.

I asked Gayle what he likes best about golf.

For him, three things come to mind. "It's the exercise, fresh air, and friendships that keep bringing me back," he said. "Other than church, it's the best place to meet new people."

With age and time, he says he loses about 5 more yards off the tee each year, but has "adjusted" to stay competitive.

Grant recalled how on a Friday morning golf scramble in Mahtowa about 25 years ago, his team and another tied for low score. Each team was to select their best player and then they would have a closest-to-the-pin shootout on the No. 1 hole. His team chose him. He hit a magnificent shot on the 180-yard hole and figured he had brought his team victory. Not to be outdone, his competitor hit an equally splendid shot. Both shots were resting on the green. It took a tape measure to determine the winner. Grant and his team lost by an inch.

As for some other golf heroics, Grant said he made a hole-in-one at Mahtowa, with about only eight people in the Clubhouse bar. "Just lucky it didn't cost me an arm and a leg to buy a round for those present!" he said.

Being a little more than 20 years younger than Gayle and craving that golf course and life longevity, I had to ask him what his secret is. Well, it just so happens his wife doesn't eat red meat, and he doesn't eat much red meat either, so their meals are often chicken or fish and lots of vegetables. He hasn't smoked cigarettes for 60 years since he and his wife had a baby who had asthma. He doesn't touch alcohol. Sounds just like what the doctor ordered. I should pay more attention.

Thanks to Gayle, a golf and life inspiration.