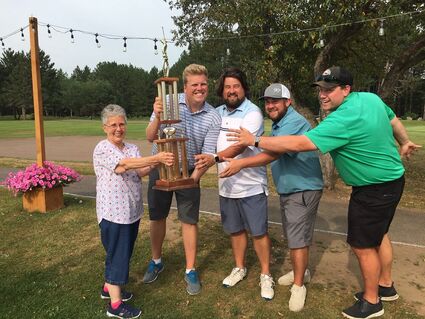 On July 19, 20 teams and 80 players converged on the Cloquet Country Club to play in the second annual Moose Cancer Golf Fundraiser. Gary “Moose” Pastika, a 50-year member of the club, died of colon cancer in 2018. The tournament (canceled because of the pandemic last year) is a tribute to him.

Most funds generated go to the Cloquet Community Memorial Hospital Foundation, with an additional donation made to the Second Harvest Northern Lakes Food Bank.

The hospital foundation has plans to buy a special chair with heating and massaging capabilities for patients receiving treatment in the infusion therapy rooms at the hospital.

“It is a great cause, and I’m sure Moose would approve,” said tourney director Steve Korby, who also writes for the Pine Knot News. Moose’s brother, John, and his wife, Shelley, came from Florida, and his sister, Judy, and her husband, Tom, traveled from Nebraska to help kick off and celebrate the event.

Local individuals and businesses donated prizes, sponsored holes, and golfed in support of the fundraiser. People came from Wyoming, Virginia, Iowa and the Twin Cities area.

First place, at 17 under par, was the team of Andrew Salo Korby, Adam Stowell, Jimmy Stafford and Matt Carlson. They started with a couple of pars but then went on a birdie and eagle binge. The other paying spot was ninth place, settled between three tied teams with a scorecard playoff.

Claiming the prize was the team of Rob Peterson, Squirrel Ross, Mark Johnson and Corky Roe.

Korby offered his thanks to all the sponsors and donors, players and folks who just came to hang out and have dinner. “Thanks also to the Cloquet Country Club for providing such a perfect setting and kind staff,” he said.