Skunk on the run 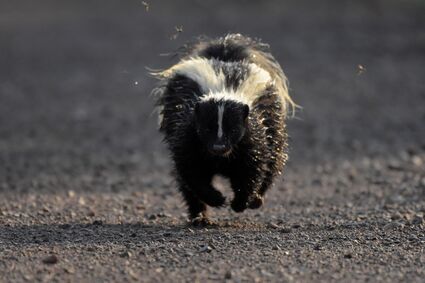 Skunks have been on the move recently - as evidenced by a rise in those killed by vehicles on area roads - likely due to typical food shortages brought on by the dry summer and the fact that young skunks are leaving their mothers and wandering until they locate new territories. Photographer and Pine Knot News subscriber Mike Farmer said he saw this skunk when he was driving down a rural road in the region. "It appeared to have just gotten out of the water and was being harassed by horse flies. So was I. It noticed me and hopped into the woods before we had a stinky encounter," he wrote.