It's the highpoints he's after 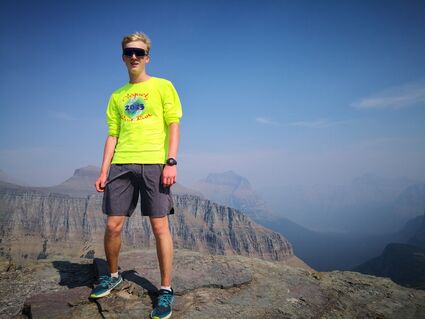 Over the last year and a half, 2021 Cloquet grad Josh Sanders has discovered a new and unique hobby. With time on his hands due to distance learning during the pandemic, the athletic Sanders began "highpointing" northern Minnesota counties as a way to find new areas to hike and run, and get outside. Sanders explained that highpointing is going to the highest natural point in a given area, whether it be a county, state, country, or any point of prominence.

His hobby brings with it goals and adventure. He can find and reach highpoints, and explore new and unique places, all while being active.

To get to the highpoints, he uses topographic maps and old surveying maps to find the contours of the land. He also uses Google Maps to get to the point, and the Peakbagger app when he needs coordinates for exact locations.

Some of Sanders' favorite highpoints are Eagle Mountain, the highest point in Minnesota, and the Carlton County highpoint in the Fond du Lac state forest.

"It [the Carlton County highpoint] is kind of in the middle of nowhere, and it's very remote, but I found it very peaceful and one of the more enjoyable high points in northern Minnesota," said Sanders.

He also enjoys highpoints with fire towers on top of the natural point because of the view of the surrounding area. However, highpoints may also be in fields, forests, or places with no view at all.

The longest single point he has completed was in Pine County during winter. In 5- degrees Fahrenheit weather, waist- deep snow, and inadequate winter- hiking gear, Sanders hiked 14.5 miles in order to check the highpoint off his list.

"That was a crazy one," said Sanders.

His longest highpointing trip, where he marked off multiple points, consisted of 22 miles of walking in one day.

The highpointing community, although smaller than mountainous communities, is also a part of the hobby's life. Highpointers use the Peakbagger app to record highpoints, connect with each other, and find routes and goals. Sanders primarily uses Peakbagger to make highpointing lists, find coordinates for locations, and keep track of finished highpoints in relation to the Peakbagger community.

Currently, Sanders is working on completing every public access highpoint in Minnesota. In the Peakbagger database, there are 111 of these points. Sanders has completed 58, which gives him the second- highest number of points completed in relation to the current Minnesota Peakbegger community.

Sanders is also working on highpointing every Minnesota county. Only three people have ever completed this, and Sanders hopes to be the fourth. So far, he has completed 35 out of the 87 counties in the state, which puts him at ninth place.

When Sanders is highpointing, he GPS- tracks himself and takes photos along the way. He also writes trip reports to further prove that he completed the point, which includes the amount of time it took him to get up and down (from his parked car), things he found interesting about the trip, or notes about the weather and route.

Unsurprisingly, with highpointing also comes hours upon hours of driving. Sanders has driven more than 4.5 hours one way to reach a Minnesota county highpoint destination, then driven the 4.5 hours back, in the middle of winter. He adds that the car he used on this trip lacked cruise control and had a malfunctioning speedometer, but this didn't discourage him, as he enjoys the time he spends driving through new towns, counties, and states.

"You're just seeing all these beautiful and unique areas in the middle of nowhere," Sanders said.

For Sanders, an important part of highpointing is keeping good relationships with landowners. Some highpoints may be on private land, and being respectful of the land ensures that other highpointers can complete the journey in the future.

"One of the most important parts is maintaining good relationships and leaving these areas for future people to enjoy it," said Sanders. 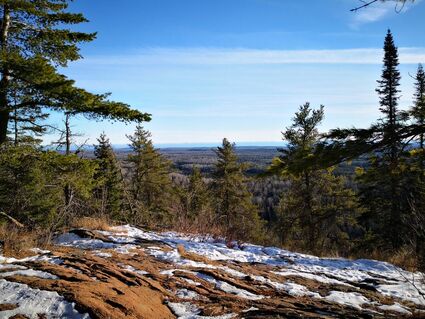 Josh Sanders took this photo from Eagle Mountain, the highest point in Minnesota.

From hobby to major

Sanders has left Minnesota behind him, but still carries with him his passion for highpointing. Now a freshman at Ferris State University in Michigan, Sanders plans to major in land surveying.

He plans to continue highpointing as a hobby while out in Michigan and - when he has the time - work on completing his Minnesota County highpoints goal.

"I plan on continuing highpointing for hopefully the rest of my life," said Sanders.