Neglected West End getting some love 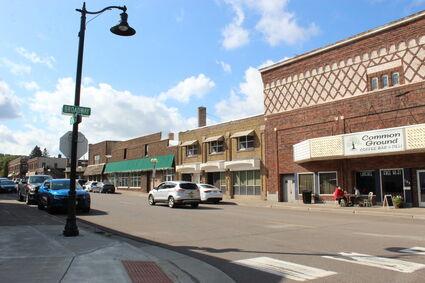 Cloquet's West End will be bustling on Sept. 25 with the West End Flourish celebration.

It's not unusual to see visitors to Cloquet snapping photos of the world's only working Frank Lloyd Wright-designed gas station and its cantilevered roof at the corner of Minnesota Highway 33 and Cloquet Avenue. When they're done, they might head east and stop by the historical society or downtown Cloquet to eat or shop. More often than not, they simply hop into their cars and continue their journey north on Hwy. 33 or back to Interstate 35.

Rarely do guests realize a significant part of the city sits west of that major intersection, mostly hidden by the steam engine at Fauley Park and the bridge. The West End is Cloquet's most historic business district, the first part of town rebuilt after the Fires of 1918, the one with its historic buildings mostly intact, and the area with the most vacant storefronts.

The same highway that brings those tourists to town bears much of the blame for the gradual decline of the West End business district over the past 70 years or so.

For the first 50 years or so of Cloquet's existence, the West End was the beating heart of the city, particularly in terms of government. City Hall and the jail were here, the Pine Knot newspaper and lots of different stores were all located in the West End, including banking and commerce, lodges, the Masonic Temple and more. Traffic flowed from Dunlap Island up Arch Street to Pinehurst Park, and things were busy, busy, busy.

The construction of Hwy. 33 through Cloquet in the 1960s took the bridge away from Dunlap Island and created a new north-south traffic flow versus the previous downtown to West End east-west only traffic flow. That same decade, City Hall was moved to the former YMCA building on Cloquet Avenue - where the fire station is now. The move left the district without the purpose for which it was designed: to be the municipal center of governance in the city, Cloquet Community Development Director Holly Hansen explained on a recent walk down Avenue C.

It wouldn't be the final slight to the West End.

While the first Hwy. 33 still offered an exit to Dunlap Island, even that was eliminated in 1995 when the Minnesota Department of Transportation raised the bridge over the St. Louis River even higher. Traffic patterns changed to what you see today. The change dramatically affected traffic circulation into the West End as well as the city's connection to its riverfront.

For decades, the West End has been getting sleepier, literally. Some landlords either can't or don't bother trying to rent out the ground floor, making ends meet by renting out apartments upstairs and leaving storefronts vacant. Much of the traffic down Avenue C is residential. Trucks and workers headed to Sappi, USG and Upper Lakes Foods make their way down Broadway Avenue, but these industries don't have a lot of foot traffic or employees popping out for a cup of coffee.

But things may be changing. Hansen points to Duluth's Lincoln Park as an area that has seen tremendous growth in recent years, a formerly struggling business district that is now a hip place to go eat and drink in Duluth. The former Avenue C restaurant might have sparked that kind of revival in Cloquet, but the popular eating and dining place closed in 2017, less than a year after it opened.

One of the biggest draws is the Common Ground Coffee Bar & Deli in the old Chief Theater; in addition to food and drink, the building has become an activity center for a number of different groups. Local florist Skutevik's relocated its business to 305 Broadway, bringing eye-popping floral displays to the area. Crowned Salon owner Sarah Faust moved into the former Personal Touch Beaute building in October 2019, and stayed and thrived despite numerous challenges from both water pipes and the pandemic. Split Rock Investing and Alaspa & Murray accounting moved into the old City Hall building.

Long vacant, the old Roberts Home Furniture has been purchased and is being renovated. Vacant even longer, the Smokies store is also under new ownership with plans for a shop in front and apartments upstairs.

"We want it to thrive, not survive," Hansen said.

The city of Cloquet has led the efforts to revive the West End, by first undertaking massive projects to renovate and improve the network of parks that cluster in along the river and on either side of Highway 33, along with rebuilding Broadway Avenue into a roadway that was more friendly to pedestrians and easier to navigate.

Additionally, the Cloquet Economic Development Authority offered low-interest gap loans and grant money for building improvements to businesses that were owner-occupied in the West End; the city also put out a call for brew pubs or other destination drinkeries to consider the West End.

More recently, revitalization efforts received a nice boost when the city was selected for the 2020 Artists on Main Street cohort, along with three other Minnesota municipalities. Over two years, Cloquet will receive $30,000 for project funding and program implementation.

The following grants were approved in the first round:

• West End Art Day: Painters set up July 17 in Fauley Park to paint or sell their art. Children could paint suncatchers and canvas. There was live music and a food truck. Phyllis Ducey.

• Random Finds Of Art: Artists painted mini canvases at Wood City Nutrition in August. Paintings were distributed throughout the West End in September for people to find and keep. Some are still hiding out here. Margie Helstrom.

• Plein Air Paint-Out: Artist Julia Jaakola has hosted more than one "paint-out" for artists in the West End. She also did landscaping work outside the old Smokies building and will paint signs for the new business.

• Ivory Garden: Photographer and musician Krista Gardner will bring an open piano for the public to play, with a flower display.

• Have a greet seat: Local "chair lady" artist Kris Nelson is painting four chairs for businesses in the West End to showcase the culture and beauty of the area.

• Rekindle Community: Carlton County Historical Society will host an educational tour, a documentary video, and a historic photo display. They will collect personal stories from the participants to add to the history of the area. Charley Langowski. 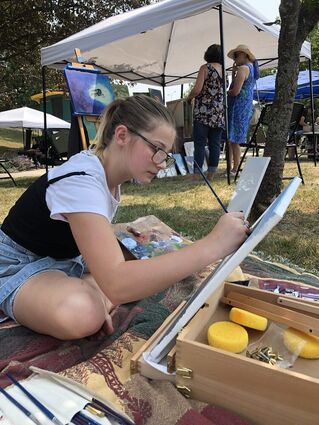 Art has come to the West End this year as part of an arts initiative. Elizabeth Peterson painted the Common Ground building during West End Art Day in midsummer.

On Sept. 25, many of those ongoing efforts will be highlighted at the West End Flourish celebration, with seed money coming from a grant. Avenue C, Avenue B and Vine Street will be closed from noon to 6 p.m. for a celebration of the West End and the arts, and many other things that make Cloquet unique. Vendors will line the streets, Wentworth Park will be a hub of activity, and the VFW parking lot will be transformed into an outdoor food court, featuring Carlton County food trucks.

"We're throwing a party to showcase the West End Flourish efforts and encouraging people to imagine what Cloquet's Historic West End could be," said organizer Ivan Hohnstadt, Pine Knot News advertising director. "This is the Pine Knot's neighborhood. Why wouldn't we champion it and encourage others to help us revitalize the area?"