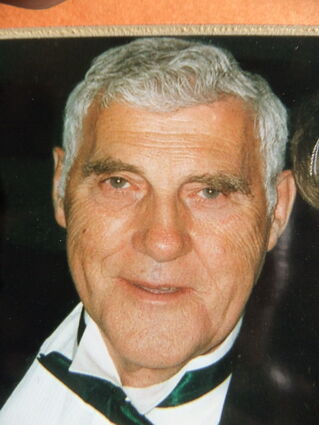 William "Bill" Nicholas Meisner, 94, of Cloquet died peacefully Wednesday, Sept. 1, 2021, at Suncrest Assisted Living. He was surrounded by his family as they sang favorite songs he taught them.

His family and friends will miss him immensely and treasure his memory as an exemplary father, grandfather, uncle, brother, teacher, and friend.

Always an aficionado of a well-turned phrase, and a wordsmith himself, Bill penned the following and requested it be used for his obituary:

Born in the boom years of the 1920s, I was raised as a poor waif of the Great Depression, playing hard and happily in the streets and fields surrounding Cloquet. Having very little, we didn't expect much. Too young to become cannon fodder early in World War II, I entered the business world with a newspaper route at about 13, a not very successful financial venture. A couple of years as a grocery boy were a bit more satisfying, and I learned in these early years the values of working for my own support. Being the eldest of seven children, I was expected at a rather early age to begin taking care of myself.

Later in the war, with so many millions of men and women drafted for military service, we high school boys took their places in the local mills. I'm sure it was gratifying to feel that we were now eligible for a place in the grownup world. I remember our pay was 60 cents an hour.

After a stint in the U.S. Navy, I returned to what seemed a future in the mills. However, a fortuitous move, nurtured by a close friend who proclaimed, "I'm not going to spend my life in that mill" got us registered at Duluth State Teachers College, now University of Minnesota Duluth.

Graduating without honors into a welcoming teachers' market, I spent the next 33 years, most of them at Carlton High School, trying to talk young people into doing things better than I could ever do them. Many of them, I have discovered, have done that very thing.

I speak as though I have been the great enabler of my life, but I must confess that it is not so. Three years after college graduation I stepped into a role I had never dreamed of and never really deserved. That step was accompanied by the most incomparable wife I could have imagined, a woman who led me into the beauties of love and life. A woman, furthermore, who followed wherever I led, not only willingly, but with zest. To make me an even better human being, she provided me with five more-or-less trouble-free children, who have become the symbol of whatever success I may lay claim to in this life. Can a man ask for anything further?

For frosting on this remarkable cake, consider 25 years of carefree retirement in the company of that same woman. Nineteen of those years we wallowed in the warmth of south Texas among numerous newfound friends, relishing the pleasures of an interesting and enjoyable culture. Though she slowly slipped away into dementia, no tragedy could ever extinguish the memories of what we once possessed.

So, scatter me to the wind. Having risen from such beginnings to be a wandering child of this world, I say, send me back to that world. Who knows - maybe someday, in a way that none of us can fathom, we may meet again (as Kipling said), "somewhere east of Suez."

A park bench is being donated in honor of the many memories Bill had of playing ball with the Wood Conversion Company team on the Pinehurst Park ballfield. Additional gifts will go to the County Seat Theater in Cloquet in recognition of Bill's keen interest in promoting the arts for his family and hundreds of students over the years.

Please join us on Monday, Sept. 20 for an outdoor memorial picnic at Oldenburg House, 604 Chestnut Ave., Carlton. We'll start visiting at noon, have a program and story sharing at 1 p.m. and continue with socializing after. Dress for the weather, and please bring a mask in case shelter doors must close.