By Jack Slater and Woody Waugh

We miss the coach who changed soccer for us 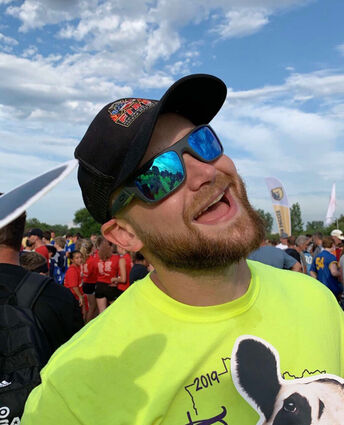 In light of the one-year anniversary of Anthony L. Makela III's tragic death, we wanted to share with the world how much he meant to those around him.

Tony passed away in a single-vehicle accident on Sept. 13, 2020. He worked as a counselor at Northwood Children Services. Beyond that, he was the assistant coach for men's soccer at Lake Superior College and Proctor High School. We played under Tony when he was head coach for the Cloquet U18 spring soccer team in 2019.

Tony's enthusiasm and approach to both soccer and his players were like no other coach we'd had before. From the first practice to the last game, he focused on connecting before coaching. He made a genuine effort to establish a personal connection with each of his players. Tony was one of our peers, a part of the group dynamic as much as any of the players.

I only played one season for Tony, the spring following a disheartening and frustrating fall senior soccer season at Cloquet High School. My confidence was low and an early-season knee injury didn't help, but Tony reignited my passion and love for the game. I had never had so much fun on a soccer team before, and Tony's spirit and devotion motivated me and the team. I went on to have the most prolific season of my life, netting more than 20 goals and setting up half as many. Tony had an innate ability to bring out the best in anyone around him while creating a fun and memorable environment. He meant everything to me and many of my teammates.

Much like Woody, my time with Tony was limited to one short but memorable season on a team nicknamed "Tony's Titans." My introduction to him came the year prior to joining his team, when we defeated him and his squad in a tournament semifinal. His incessant yelling during that game made me realize why everyone loved the guy. A year later, his excitement to meet me and my brother at the first practice was one of many special moments.

I quickly learned that Tony was, above all, a man of passion. My experience on that team revolved around him. He set the coaching standard for the future of almost every player on that team. Looking back, the individual care and work he devoted to each player was inspiring. His guidance reached beyond the sport. He showed me, along with everyone on that team, that he cared.

Even after his death, his memory is guidance. He engrained a feeling of brotherhood and care in my mind and in our team. Tony is someone I look up to now and will for the rest of my life. I can only be grateful for the time I shared with him.

A coach who shows true interest in the team and its players is rare in youth sports. We weren't the greatest team by any means, but he showed us all how to understand a lot about ourselves and our own game. The greatness in his coaching lay not in his trophy cabinet but in his heart.

If we were losing when halftime came, he made us get to that touchline and run until we matched his mindset. He wanted more than anything for us to succeed together. On one occasion we were down 2-0 nearing the end of a tournament semifinal and needed at least a tie to advance, which he made sure we knew. A late goal from Woody brought us to a nail-biting 2-1 deficit. There were about 30 seconds left and we swung in a ball from a corner and there was Tyler Issendorf, a central defender, with a bullet header into the back of the net. The team rushed Tyler in an unforgettable moment of celebration.

Tony stood on the sideline, yelling. For him, the job wasn't over until that whistle blew. Play restarted but ended just a few seconds later. The result was a 2-2 tie and the celebration continued - we had just barely captured a spot in the final. The moral of the story is that he kept us hopeful. We could've been up four goals and he would've been yelling just the same. A great game or a bad one was treated with the same intensity.

Tony's coaching affected our team more than any trophy could have. He showed what an excellent coach can do for a person - which is more than you might have expected from yourself. On behalf of all of your players, thank you. You taught us enough lessons for a lifetime.

Though we both knew Tony for only a short period of our lives, his impact continues. We can only imagine how important he was to his family, closest friends and longtime players and teammates. He was a bright influence in his field of work at Northwood, and is surely missed by all. Tony's impact in the lives of others is remembered today through a memorial scholarship fund at Lake Superior College.

Writers Woody Waugh and Jack Slater are both Cloquet High School graduates who said they wanted to honor Tony in Carlton County on the anniversary of his death. Although he lived in Duluth, he was involved with many local athletes as a coach and friend.