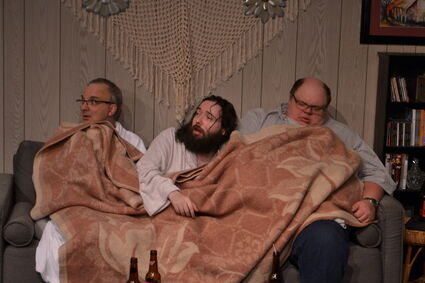 The boys (from left, Jeff Anderson, Sean Biskey and Jeff Ross) "cowboy up" and accept Jessie's extreme dare to go jump into a frozen lake in the County Seat Theater Company's production of "Beer For Breakfast," which opens today.

Get ready to laugh at the County Seat Theater Company's fall season opener, the comedy "Beer for Breakfast," which begins its run at the Encore Performing Arts Center starting tonight, Friday, Sept. 24.

Cast members Sean Biskey, Jeff Anderson and Jeff Ross portray a group of middle-aged buddies who reunite for a "guys' weekend" in a snowed-in cabin to eat chili, drink beer and relive the good old days. These guys are out to prove they've still got it, so they are going to party like it's 1979. Despite divorce, unemployment, and a stroke, spirits are high until Jessie (Christy Wolvert) - the wife of absent friend Adrian - shows up in his place.

"This cast has blended well together, I have believed their relationships from early on in our rehearsal process." said director Joel Soukkala. "This show is a perfect blend of fast-paced silliness and heart."

Will the men win their right to an all-out guyfest, or will woman be crowned the stronger sex after all?

The theater will still have safety precautions in place regarding Covid.

"We plan to only add as many seats as needed and keep as much distance between patrons as possible," Soukkala said. "We will also be requiring guests to wear masks when entering and while in common areas."

Tickets for live or virtual performances can be reserved by calling the box office at 218-878-0071 or online at http://www.countyseattheater.com.

The County Seat Theater Company offers a full season of local performances, musical acts and has an art gallery featuring work by local artists to go along with the theme of each show.