Eskomos lose way in the fog 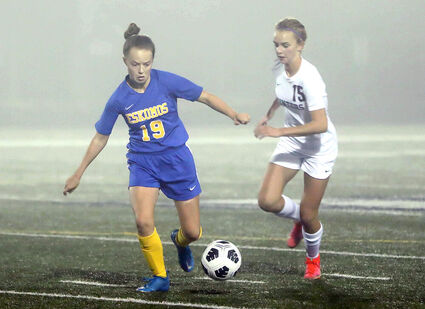 Esko's Avery Kuklinski plays the ball away from Duluth Denfeld's Alyssa Doyle during Tuesday's match, played in a thick fog at Esko Schools Stadium. Denfeld got a 2-1 win.

During a foggy Tuesday night game, fans barely saw the Esko girls soccer team fall 2-1 against a tough Denfeld side.

A slow start for the Eskomos left the team unable to control a strong Hunters offense. In the 17th minute, Denfeld's Kamryn Hill broke the deadlock with a goal following a corner from Aliyah Bartling. Denfeld took the wheel early and continued to break through the opposing defense.

The Eskomos responded with mounting chances near the end of the first half, but the game remained 1-0 to the Hunters going into halftime.

To start the second half, the two sides seemed evenly matched. Chances came and went but neither side could find a finishing touch. Finally, a well-played through-ball from Denfeld's Hill left Bell Grochowski one-on-one with the goalie; the Denfeld senior then slotted the ball past Esko's Orie Randall in the 60th minute. Denfeld doubled its lead and momentum once again shifted in their favor.

The game wasn't quite finished yet. In the 75th minute, freshman Kaitlyn McConnell got a goal for the Eskomos, but the late surge wasn't enough to conjure a comeback. The whistle blew and the game ended 2-1 for the Hunters.

"We're having a bit of a low right now but I think we're getting put together before our playoffs," she said, calling McConnell "irreplaceable" in her first year on varsity and praising Randall's goaltending.

On Thursday night, the Esko girls were set to face the Lumberjacks in the last regular season game for both teams. Coach Lilly knows the stakes for the "gigantic rivalry."

"The girls are extra pumped for that game, so hopefully they can bring something to Bromberg field," Lilly said. 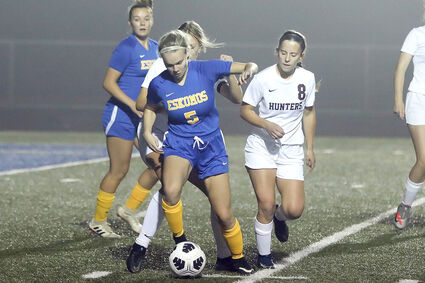 On the opposing side, Sadie Senich, senior captain of the Cloquet girls soccer team, has her expectations in place. "The intensity of the game is always a little bit different since we've always been rivals. I think if we play the way we have been and keep our composure we'll find success on Thursday," Senich said.

Check next week's Pine Knot News for the results of that game.

Despite going head-to-head twice this season, Esko and Cloquet will not meet in the playoffs. Sectional adjustments resulted in Cloquet being put into Class AA, while Esko remained in Class A.

Playoffs begin for all boys and girls soccer teams next week. Brackets were not determined before presstime.