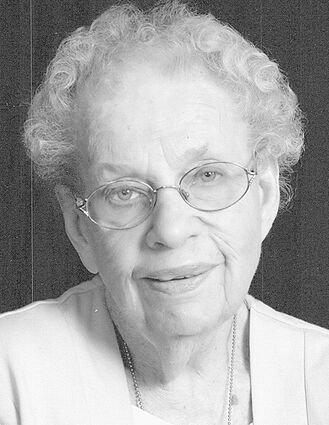 Dorothy Jean (Gulbrandson) Carlson, 90, passed away Friday, Oct. 15, 2021. Dorothy was born Oct. 23, 1930, to Harold and Sybil (McCulloch) Gulbrandson in Cloquet. She graduated from Cloquet High School and the University of Wisconsin–Stout, majoring in home economics.

She married Gordon M. Carlson on June 26, 1954. They made their homes in Duluth and Cloquet while Dorothy taught in Superior. In 1964 they moved to Green Bay, where they continued to raise two children. She taught at Northeast Wisconsin Technical College and the YWCA, then returned to teaching in the Green Bay public schools.

Gordy and Dorothy enjoyed winters in Ocala, Florida, and summers at Shawano Lake. They enjoyed traveling, bowling, bridge, and watching football and golfing. She sang in various choirs for more than 70 years and enjoyed needlecrafts.

Dorothy was preceded in death by her husband Gordon; parents and parents-in-law; brothers-in-law G. Donald Carlson and his wife Jean, and Robert Carlson; and daughter-in-law Kim L. Carlson.

The funeral service can be viewed at youtube.com/watch?v=yd2R4GBcqes. Expressions of sympathy may be made to the family by visiting lyndahl.com.

The family would like to thank Dorothy's many friends and her Bethel Lutheran Church family, along with her wonderful caregivers at Alpha Senior Concepts and at Moments Hospice.