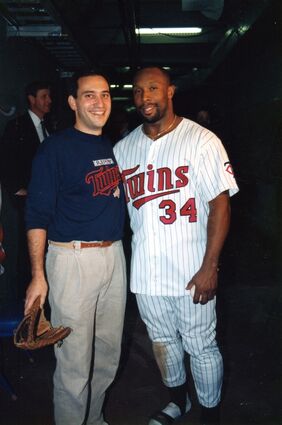 Joe Reis posed for a picture with Kirby Puckett after the fan caught his homerun ball in Game 6 of the 1991 World Series.

Do you remember where you were the evening of Oct. 26, 1991 - 30 years ago? If I tell you it was the night that Twins baseball player Kirby Puckett hit a home run in the bottom of the 11th inning to win Game 6 of the World Series, would that refresh your memory?

Serious baseball fans or not, a vast majority of Minnesota's populace was tuned in to that game. If you are now over age 35, you probably remember it was a big deal.

The Twins won their first World Series in 1987, a magical run of all home game wins culminating with a win in Game 7 against St. Louis. Here it was only four seasons later, that the Twins were back in the World Series again. They had finished last in the division in 1990 and so had the series opponent, the Atlanta Braves.

Do you recall that there were unidentifiable vendors on Superior Street corners in Duluth selling Twins championship T-shirts and sweatshirts to ravenous fans, right out of boxes? Carter's Appliance on Cloquet Avenue, just before the games, sold a record number of RCA color TVs. I was one of those happy customers.

As in 1987, the Twins had the homefield advantage but were behind three games to two heading into Games 6 and potentially 7 at the Metrodome. The Twins had to win both games. Homer Hankies were a novel fan staple in 1987 and returned in the 1991 series. I remember the TV broadcasters had sound meters measuring the fans cheering in the Metrodome. It was equivalent to a jet plane's engines on takeoff.

While relaxing at the lake recently, I saw an episode of "My MN Story," produced by Twin Cities PBS, featuring the story of the guy in the bleachers who caught Kirby Puckett's momentous home run ball in Game 6. His name is Joe.

Being a baseball fan, I was intrigued. With some investigative work, I was able to track Joe down.

Joe Reis was born and lived his early days in Connecticut. His dad was a Mickey Mantle and New York Yankees fan, and at least a few times every summer would take Joe and his brother to games including, for sure, bat day at Yankee Stadium. He also remembered watching the Bronx Bombers on PIX11 TV, and adjusting a small antenna to get reception and hear announcer Phil Rizzuto's voice.

Joe grew up and became involved in the real estate business, and his job led him and his wife and young family to the Twin Cities area in 1986. He immediately became a Twins fan and went to all the playoff and World Series home games in 1987. They were hooked on rooting for the now hometown Twins.

For Game 6 of the 1991 World Series, Joe and his wife Kathy had Metrodome tickets on the third base line, near the Twins dugout. A friend offered to trade four tickets in the outfield bleachers beyond the plexiglass fence for Joe's two field-level tickets. Joe chatted with Kathy and they decided to make the switch. Now they could bring their two oldest daughters, Jessica and Michelle, who were only 5 and 7.

The family arrived early to watch batting practice. Joe brought his glove with the hope of maybe catching a practice ball for his daughters. With no luck, the family then went to their game seats in section 101, row 5. In the third inning, Ron Gant of the Braves ripped a line drive to left center. He said everyone in section 101 stood. Joe lost sight of Twins center fielder Kirby Puckett, who jumped like Superman and snagged the ball - ending the Braves' scoring opportunity. Joe thought the bang he heard was the ball hitting the plexiglass but it was actually Puckett's forearms. The crowd of more than 55,000 fans went crazy.

After the game, Puckett famously announced what he had told the team after they had lost three straight games and faced defeat without coming back in the final two games. "You guys should jump on my back tonight. I'm going to carry us."

In the bottom of the 11th inning with the game tied, Puckett led off for the Twins. Joe took his camera out. Kirby took three pitches, which Joe said was highly unusual for the free-swinging Puckett. Joe decided to put the camera away and take his glove out. Next pitch, from Braves relief pitcher Charlie Leibrandt, Puckett hit a deep fly ball to left center, right at Joe and his family. Sure enough, the ball was over the fence and caromed off a couple of fans. Joe put his glove hand up as high as he could reach, waited for a few seconds, and then brought it down to check. The ball was in the webbing.

There was jubilation with the walk-off home run. Fans patted Joe on the back. They wanted to touch the ball. His daughter told him that Dad "squished" her in his effort to snag the ball.

There was, of course, a Game 7 yet to be played on Sunday. And it was a thriller, with Jack Morris pitching 10 innings of shutout ball for the Twins win and what some have called one of the most memorable World Series.

But back on Saturday night, Joe said he told Kathy: "I want to give Kirby the ball. Not sure how, but that is my goal."

They talked to ushers and security folks and the Metrodome staff started leading the Reis family downstairs toward the Twins locker room door. Rules were such that only Joe could bring the ball to Kirby. Out of nowhere, Twins manager Tom Kelly appeared. He broke the security protocol and the whole family was allowed to go forward. A few minutes later, Kirby appeared.

When Joe presented the ball, even though others thought he could get top dollar on the memorabilia market, his mind was sure. Give it to Kirby.

Joe recalled Kirby joking, "What's it going to take to get that ball - my house?"

"No, Kirby, this ball should go with you when you are inducted into the Baseball Hall of Fame," is what Joe remembers saying.

It was a choice Joe never regretted. Kirby was very thankful and signed autographs and posed for pictures with the family.

ESPN interviewed Joe. A picture with Kirby was in the Monday edition of the Minneapolis Star Tribune sports section. He did other interviews.

Joe's interaction with Puckett didn't end there. They stayed in touch, Joe said, enough that when he asked Puckett to play in a celebrity golf fundraiser run by his employer, the baseball legend obliged. Puckett always immediately asked Joe, "How are your girls?"

When the Twins recognized the 10-year anniversary of the World Series victory in 2001, Joe and Kirby were reunited.

That was also the year Puckett was put into the Baseball Hall of Fame. He had his career shortened in 1996 with the loss of vision in his right eye.

Kirby asked Joe to come to New York at his expense for the induction. Joe said that during the pre-ceremony Kirby was with Dave Winfield - another inductee and a Minnesota native - in a roped-off area with reporters. Kirby saw Joe and yelled, "Joe, Joe" and jumped over the rope to offer a big hug. Joe said he wishes he had a picture of the look on his brother's face as Kirby was squeezing him.

Kirby had legal issues in the early 2000s and his legacy was tarnished. He died of a stroke in March 2006 at the age of 45. With 12 seasons as a Twin, he remains a hero to most and his baseball heroics will certainly not be forgotten.

The Twins had a remembrance ceremony at the Metrodome the month he died. In attendance were Twins dignitaries and former teammates and friends. Joe asked the Twins if he could sit in section 101 one last time. For the memorial service, his wish was granted. Joe and his family were in the spot where he caught the ball.