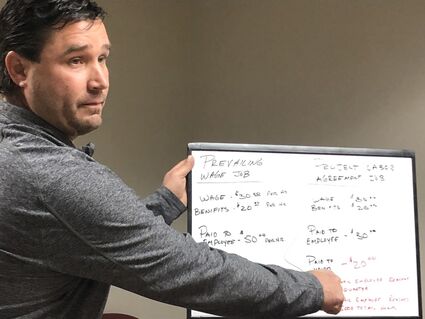 Adam Kiminski of Kiminski Paving addressed Cloquet City council members Tuesday in an effort to help them understand how project labor agreements work for people who are employed by union and non-union shops, versus prevailing wage. Kiminski said he came to the meeting after joining a county PLA committee and learning how many officials don't understand the complicated agreements.

After six months of talking about the city's project labor agreement, the Cloquet City Council voted Tuesday to change absolutely nothing.

The decision was not unanimous by any means. The council voted on two resolutions related to the PLA: the first, a motion to increase the city funding level that triggers the PLA from $175,000 to $250,000, which failed to get the required supermajority of five when councilors Bun Carlson and Lyz Jaakola voted no. The second failed motion was to add language to the PLA agreement which would require non-union contractors to pay prevailing wage to employees...