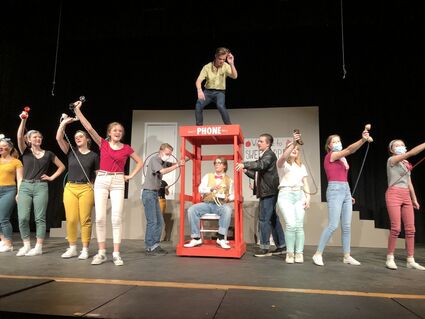 Teens in the town of Sweet Apple spread the word - with old-school telephones - that Kim MacAfee and Hugo Peabody "got pinned" and are now boyfriend and girlfriend. Esko High School's production of "Bye Bye Birdie" kicked off Thursday night and will continue through next Sunday.

After last year's Covid uncertainties, Esko musical theater directors didn't want to revive the fall musical with anything too dark.

"We had enough drama in 2020, so we wanted it to be something that was very uplifting," said Esko choir director Meghan Knudsen.

Enter "Bye Bye Birdie," a 1963 American musical comedy about a 1950s rock-n-roll star, Conrad Birdie, who travels to the small town of Sweet Apple to make his "farewell" television performance before he is inducted into the Army ... and kiss his biggest fan, Kim MacAfee. Things aren't as simple as they seem, however, because MacAfee has recently been "pinned" to local boy, Hugo, and Birdie's manager and his longtime secretary Rose have even more on their minds. 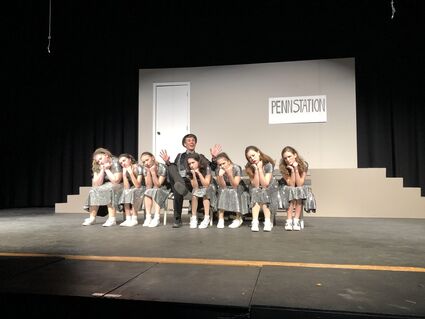 Drew Prachar as Almalou Records president Albert Peterson encourages Conrad Birdie's groupies to "put on a happy face" before they say farewell to the rock-n-roll star. Despite the name of the musical, Peterson is really the central character and Prachar is more than up to the task.

Co-directed by Joyce Bergstedt and Emily Waldo, Bergstedt said Waldo did the groundwork, doing character sketches and making sure they have the student numbers and talent to make a particular show work. Bergstedt raved about the students' dancing ability while Waldo said she's really enjoying the comedy.

"There's just so much comedy and they are really doing a good job with it," Waldo said.

Earlier this week, the cast performed for their fellow students, so they are ready. Kindergartners were captivated by the "telephone" scene, as the news about Kim and Hugo travels around town, along with the song and dance of Drew Prachar, who plays Almalou Records president Albert Peterson.

"Be prepared to have a good time and laugh a lot, and kind of be inspired by the expressiveness of some of the kids," Knudsen said.