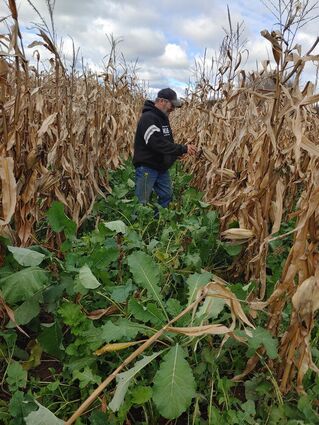 Duane Laveau walks his cornfield with cover crops in between the rows.

Duane Laveau said "every deer in Carlton County is out in my field at night."

With the Minnesota deer hunting season in full swing, a lot of hunters are hoping for the same thing. Laveau, a local land steward and dairy farmer, said the deer were plentiful in a conversation with Carlton Soil and Water District staff last week regarding the more than 18 acres of cover crops he broadcast seeded between rows of corn in June.

Just like most farmers in our region, Laveau was hesitant to try something new when he's been doing the same thing in his fields for so long. Incorporating cover crops into his crop rotation has already reaped benefits while producing the same, if not greater, yield than he normally would with corn.

"The cover crop has helped reduce soil compaction and kept the combine afloat when harvesting," he said. "I didn't leave as deep of tire ruts."

Broadcast seeding is a method of seeding that involves scattering seed by hand or mechanically over a relatively large area, versus the precision seeding that results in straight lines of corn, for example. The cover crops Laveau seeded into his corn field in June was a diverse mixture of oats, rapeseed, radish, turnip, and clovers. Cover crops help compete with weeds during the growing season, armoring the soil during the winter months when typically it would be exposed to the wind, therefore protecting and preserving precious topsoil from wind erosion. They also increase soil organic matter, leading to smaller amounts of fertilizers used on fields.

"It is important to keep the soil covered to prevent erosion from carrying my topsoil off the fields," Laveau said. Also, the deep root systems (3 to 6 feet) of the radish and turnip break up the compacted soil that has been crushed by years of being driven on. They break through that hardpan layer, allowing for water to seep deeper into the soil, which allows the soil to absorb more water rather than having it run off the surface when it's been compacted. This prevents fields from flooding and pooling while at the same time still providing water for crops. Laveau's field thrived this year, producing the same yield, if not more, even with the drought our region experienced.

Laveau plans to continue to use cover crops in more of his crop rotations.

"I am excited to see the soil health benefits from doing cover crops," he said.

Sharing in his excitement is your local Carlton Soil and Water Conservation District. The SWCD has worked with Laveau and many other farmers in our county, promoting cover crops, explaining the benefits, with the goal of making it easier to plant them. The district has a Great Plains no-till drill and Brillion seeder for rent. Better yet, the SWCD can help pay up to 75 percent of your costs to plant cover crops.

Give the Carlton SWCD a call. We are confident we can help you improve the soil health in your fields. Call 218-384-3891 or email [email protected] to find out more.

Alyssa Bloss is a conservation specialist with the Carlton County Soil and Water Conservation District. She can be reached at [email protected]