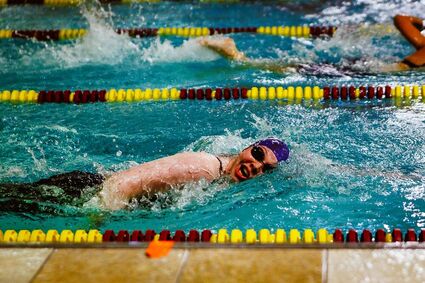 CEC swimmer Emma Peterson races in the 200-meter freestyle Saturday at Lincoln Park Middle School during the 7A section meet.

The Lumberjacks girls swim team wrapped up its season Saturday with a 7A Section meet that was both amazing and disappointing, according to head coach Rachel Peterson.

It was amazing because so many girls set new personal records Saturday, and disappointing because that wasn't good enough to advance any of them to this week's state meet, as Grand Rapids dominated the meet at Lincoln Park Middle School in Duluth.

New to the section this year, the Thunderhawks won Saturday's section meet by a margin of 180 points, scoring 510.5 versus second-place winner Mesabi East at 330.5 points and third-place Hibbing with 289. Cloquet-Esko-Carlton took seventh with 167 points.

"They didn't just blow us out of the water, they decimated our section," Peterson said. "Many of the smaller teams simply can't compete."

She compared the section meet in 2019 with this year's meet.

"Disappointing is an understatement," Peterson said. "We may have been blindsided this year, but many of my swimmers are determined to be better next year," she added.

There are many reasons to be optimistic about CEC, she said.

"We had 11 top-16 finishers, 10 of whom qualified individually and in some cases, in multiple events [at sections]," Peterson said. "Additionally, we have some seriously hardworking, dedicated and strong new seventh- and eighth-graders that I am looking forward to seeing develop over the next few years."

Top finishers for CEC Saturday included Hannah Sandman with fourth place in the 200 free and sixth in the 100 free, Megan Chopskie with fifth in the 50 free, and Emma Peterson in seventh in the 500 free. In the 100 breaststroke, Maddy Gorski placed sixth. Jessica Pagelkopf came in seventh in 1-meter diving, with Lizzy Wells in eighth. The 400 relay team of Mollie Belich, Emma Peterson, Hannah Sandman and Megan Chopskie were one of the biggest surprises Saturday, Peterson said, taking fourth place and dropping 8 seconds over their best time of the year in a "completely awesome" race, the coach said.

While they didn't make their goal of becoming conference champs this year, Peterson said they finished the season with many great performances and improvements.

The 'Jacks had 35 swimmers and five divers out for this year's squad. They were a determined group, swimming for 2½ hours every day while typically putting in well over 3,000 yards of intense exercise, or around 1.75 miles per day of full body engagement of multiple muscle groups. They finished with a winning record, and even beat Duluth East this year by a score of 100 to 86.

"We also beat or came close to beating many teams we have historically not been very competitive against," coach Peterson said. "As a whole, our team has some strong talent supported by depth that is keeping us competitive, especially at meets that the entire team contributes in scoring. We have a new diving coach and it has been absolutely amazing to watch the steady and technical improvements in diving performances."

Thankfully, Covid-19 was not really an issue this year, the head coach said. The majority of the team was vaccinated and they did not have any cases or quarantines to deal with, making it a relatively "normal" season. 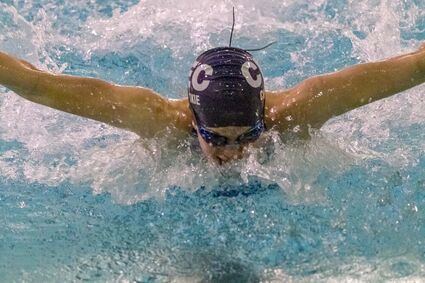 "Losing their skills, leadership and personalities always leaves small holes and bruises, but we wish them all the wonderful things we know they are capable of achieving," coach Peterson said. "It has been a gift to share their successes and we can't wait to see what their futures hold."

And those who remain have their work cut out for them.

"We have some great talent returning," Peterson said. "I am hoping that they all work to improve their fitness and come into next year's season ready to focus on the hard work needed to be competitive in our new "normal" of a section."

They will also focus on fun, and hope to attract even more swimmers and divers to next year's team.